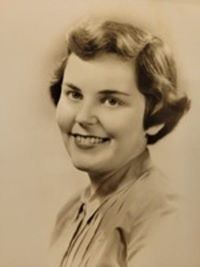 ROCHESTER - Marie Lilly Edin died on December 30, 2021 at the age of 92 in Rochester after a long illness. She was born in Melrose, Mass., and lived most of her life in Barrington.

She was the daughter of Reuben and Martha (Johnson) Edin. She is also predeceased by her siblings Robert Edin, Corrine (Edin)Flint and Ronald Edin. She is survived by two nieces and two nephews: Lori (Edin) Richard and her husband Paul, Lisa Edin Browning, Carl Edin and his wife Suzanne, Eric Edin and his wife Debbie. She is also survived by three great nephews, Andrew, Adam and Nathaniel.

Marie loved her career retiring as Clerk of Strafford Superior Court. Marie was a devout member and historian of the Holy Trinity Church in Newington, of which her father was a founding member.

She was an avid skier, enjoyed big band music and ballroom dancing. Marie was very devoted to her family. She was always there to participate in celebrating her family's successes. She made sure to pass on a bit of Swedish heritage to her nieces and nephews. She enjoyed a good laugh and was always a good sport. Trips to the beach with Fresca and egg salad sandwiches, Canobie Lake Park, getting her to drink the children's "special concoctions" are memories her nieces and nephews will never forget. Her laughter will live in us forever.