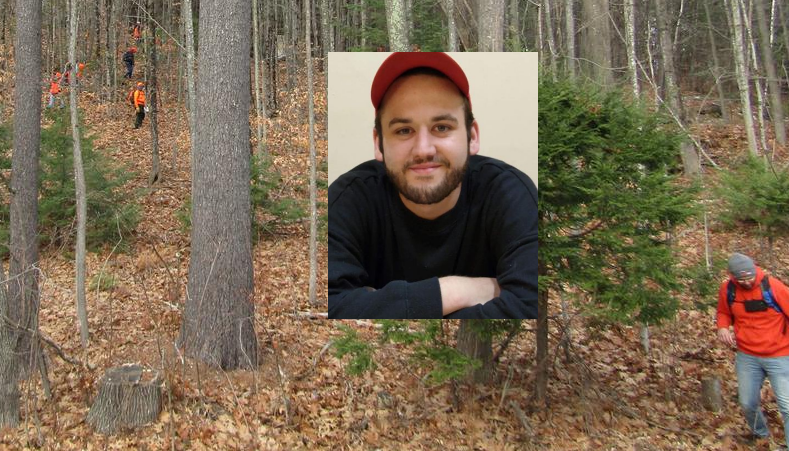 Searchers fan out into woods on the east side of the Branch River in Wakefield. (Rochester Voice photos); inset, Jacob Toussaint (Courtesy photo)

WAKEFIELD - Some 70 searchers set out on Saturday hoping to find a Wakefield man missing since Nov. 7, hoping for the best but prepared for the worst.

"We still think he's out there somewhere in these woods," said his dad, who has spent nearly every day since Nov. 8 searching the area of Old Stage and Marsh roads, rough terrain in a sparsely populated section of the town where he was last seen on Nov. 7.

On Saturday they gathered at the town ballfields at 1488 Wakefield Road.

Searchers were given bright red bandannas for protection against hunters and personal compasses if they got separated from the others. The plan was for every searcher to be in sight of others on either side of them as they combed a broad swath of land along the Branch River between Routes 159 and 16 all the way north to the town's transfer station.

His family doesn't know whether he harmed himself or he is just hiding out, however they don't believe he's left the area.

They say he has lived outside and in homeless camps in the past, but he has always called them or posted on social media every couple of days.

Search organizers urged volunteers to be careful not to fall into any of the dug wells in the area and to be prepared to find anything, including remains.

The volunteers comprised many friends and family but also folks who had never met Jacob or even knew the family.

One man who has a summer house on Lovell Lake said he just came out to help, adding they should search some of the summer homes over there.

Another of the searchers was none other than the mother of teenager Abigail Hernandez of North Conway, who went missing after she was kidnapped in October 2013 and held captive for nine months before she was let go. The man who kidnapped and sexually assaulted her for nine months, Nate Kibby, is now behind bars for 45-90 years.

After six hours of searching on Saturday Eric Toussaint Jr. said they came up empty.

He said the search continues today with family and friends of Jacob going back into the Wakefield woods.

Several Wakefield businesses including C&G Pizza, Poor Peoples Pub and Lovell Lake Grocery have donated food and other provisions to the effort.

To fund the ongoing search effort the Toussaints have set up a gofundme page.