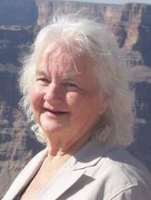 LEBANON - Maureen K. Hayden, 73, of Lebanon, died on Wednesday, July 13, 2016, after a lengthy illness.
Maureen was born in Massachusetts on August 15, 1942, to Bernard and Margaret (Kilroy) Earley. She grew up in the Boston area where she attended the local Catholic schools. In 1965 she married John Hayden and together they raised one son and shared 46 years of marriage until his death in 2011. She was employed for many years at Sprague Electric in Sanford until her retirement in 2002.
Maureen was a devoted wife, mother and grandmother and loved spending time with her family. She always made it a point to attend her son's and grandchildren's sporting events and any other activities that they may be involved in. She enjoyed camping, cooking and canning vegetables. She also loved animals and when she was younger she raised horses, cows, pigs, goats, chickens and other farm animals. She hosted many family gatherings over the years and was famous for her pig roasts. She had also been a Girl Scout leader and had been a CCD teacher at Notre Dame. She will be remembered as a kind and loving woman who was a natural nurturer. She will be dearly missed by her family and friends.
Maureen was predeceased by a sister-in-law, Judy Earley.
Surviving are her son, Charles Hayden and his wife Lori of Lebanon; two grandchildren, Matthew and Libby Hayden of Lebanon; six siblings, Bernard Earley of Independence, Ken., William Earley and his wife Rosemary of Quincy, Mass., Gerard Earley of Foxboro, Mass., Christine Langley and her husband Bruce of Mountain Home, Ark., Patricia MacDonald and her husband Stewart of Weymouth, Mass., and Peter Earley and his wife Laura of Lebanon; and many cousins, nieces and nephews.