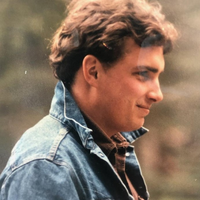 NEW DURHAM - Maurice (Mo) Norman Luckern Jr., a veteran of the Navy and Commander of the American Legion Post 72, died unexpectedly on Wednesday, Aug. 4, 2021, in his home.

Taken at the early age of 61, Mo was the first born son of Maurice Norman Luckern Senior (deceased) and Carol (Simpson) Luckern in Portland, Maine on July 20, 1960. A graduate of Bishop Brady High School in Concord, where he was known for his athleticism, as well as record SAT scores.

He earned a full scholarship to study at the University of New Hampshire. In 1983, Mo married Patricia (Hayes) Luckern, and that same year enlisted in the Navy and served for six years until he was Honorably Discharged. Mo returned to Waltham, Mass., where he started his commercial steel businesses, becoming a third-generation Ironworker, and member of the Local 7 Iron Worker's Union.

Mo focused on building hotels, schools, and banks throughout New England, and as far south as Maryland. He was an exceptional Contractor with an unrivaled ability to lead people around him. He was dedicated to raising his four daughters with Patricia, and providing unwavering support for countless friends and family members throughout the years. In 1995 Mo and his family moved from Waltham to New Durham.

In the following years, He became one of the most respected members of the American Legion Post #72 in Alton, and The Holy Order of Masons in Alton. He served as Post Commander for five years, in which time he facilitated multiple renovation and charitable projects that critically impacted the local community, including: End 68 Hours of Hunger, Meals on Wheels, and pandemic-related food initiatives.
Mo leaves behind former wife and friend Patricia Hayes, daughters Laurie Luckern, Erin Luckern, Kimberly Luckern, Marie Luckern, granddaughters Grace Luckern and Haliston Doliber. He is survived by his mother, Carol Luckern and Stepmother, Debbie Luckern, and siblings Jeff Luckern, Greg Luckern, Kim Luckern Corbeil, Brian Singh, Keisha Singh Roddy, Patrick Luckern, Ashley Luckern Hutchinson, and Katie Luckern along with many cousins, nieces and nephews.