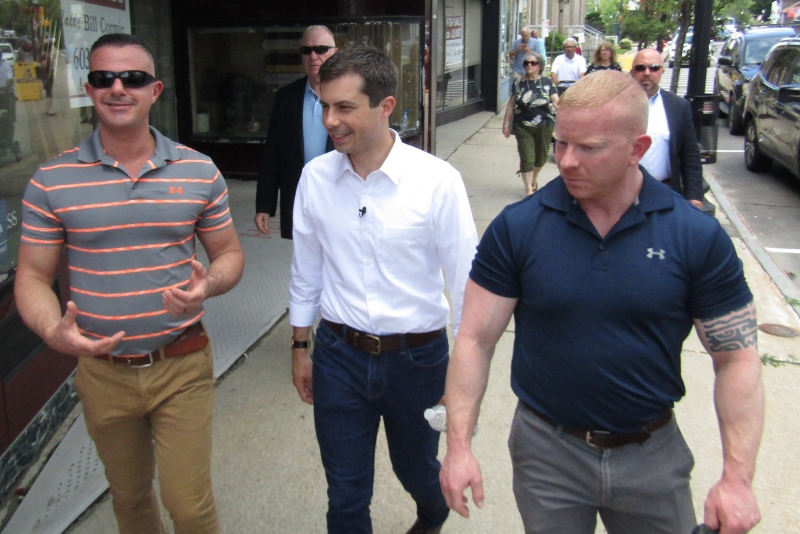 ROCHESTER - Speaking at Skele-tones Records in Rochester on Friday, Democratic presidential hopeful Pete Buttigieg was happy to talk about records, but not his record.

While chatting with store owner Todd Radict, Buttigieg was asked by a customer if he liked vinyl.

"I got a record player," he replied. "I got to admit I'm mostly digital, but something about the feel ... I do have (the Beatles) Abbey Road at home."

But when The Rochester Voice asked what set him apart from the other two dozen Democratic presidential hopefuls he looked for help.

One of a half dozen aides interjected they'd already done a Q&A in Dover and there would be no questions answered in Rochester.

Friday's stops included Rye and Dover before arriving in Rochester around 12:40 p.m.

After a brief tour of Skele-tones during which he chatted mostly with Radict, Rochester City Councilor Jeremy Hutchinson, and his husband, Emilio Cabral, the entourage, made up mostly of Buttigieg handlers and media, made their way across North Main Street to Revolution Taproom and Grill where "Mayor Pete" spent a few moments with the lunch crowd at a window table.

Ron Kalway of Strafford, who spoke with the South Bend mayor briefly, said he hadn't made up his mind on whom to vote for in next year's first-in-the-nation primary, but that Buttigieg, who would be the nation's first openly gay president, "has a lot of good ideas."

From Rochester, Buttigieg was headed on to Laconia for his fihnal campaign stop of the day.