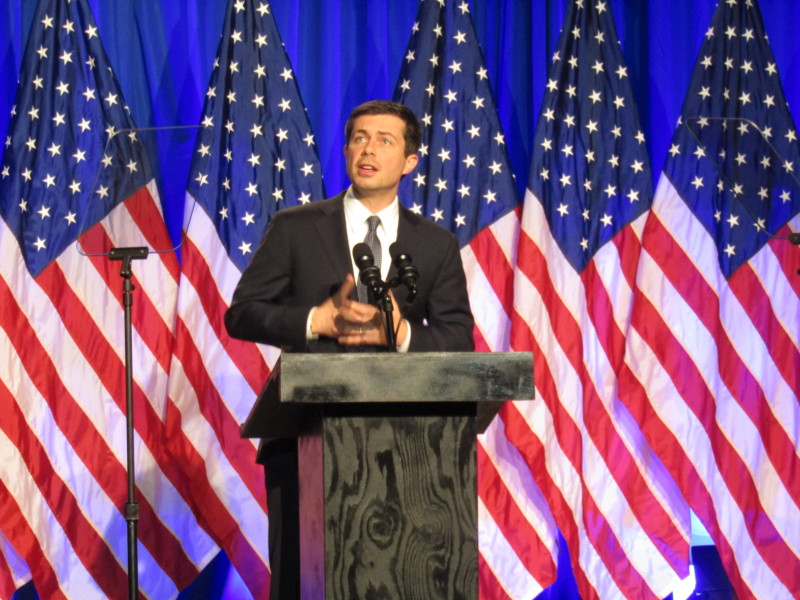 South Bend Mayor Pete Buttigieg looks to the balcony of the Rochester Opera House as he delivers his speech Monday. (Rochester Voice photos)

The South Bend, Ind., mayor, who's recently risen to the middle tier of Democratic hopefuls vying for the party's nomination, was in New Hampshire as part of a four-day swing through the Granite State over the Veterans Day weekend.

Monday's event was held at the historic Rochester Opera House and featured a full phalanx of state, national and international press including all the major American television networks.

The program called for a 1:15 p.m. start, but was held up about an hour due to television media from the major news outlets arriving and setting up late.

When the festivities finally began recently re-elected Rochester City Councilor Jeremy Hutchinson announced to a cheering crowd he was endorsing Buttigieg in his presidential bid.

"We have shared history of military service and as both having been the first openly gay men in our respective political positions," said Hutchinson.

Buttigieg's overarching message for veterans was that more needed to be done to make sure they are taken care of and made a part of the fabric of this country when they return to civilian life.

"Military reflects the best of America," he said, "but America has failed to take care of them when they came home."

He also recounted his own dismay when he entered the military during the "Don't Ask, Don't Tell" policy enacted in 1993 by President Clinton.

"When I joined I couldn't tell them of my love for another man," Buttigieg said.

Buttigieg said his own transition to civilian life after a tour in Afghanistan wasn't as traumatic as it is to some, jokingly referring to driving with his mom after his return and yelling for her to "Clear Right!" whenever they approached an intersection.

However, he did admit to wrestling with some depression, including survivors' guilt in that he had made it back while others had not.