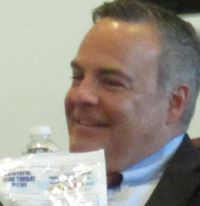 "In Response to the recent Rochester Voice article "City resident decries use of taxpayer-funded city "Blog" that is "city propaganda," I randomly chose the city press corp as an example of wasteful spending.
$100k for what?
A free press or fourth estate protects citizens by keeping government accountable. No government propaganda promoting news source will do this. Never has-never will. It's blather. Ask yourself, should we, the taxpayers be paying $100K for a "truth officer" and a government paper? Of course we shouldn't.
Not a personal attack on Mr. Wyatt, a fine man, who is the current "truth officer." Mr Wyatt informed me that one of his goals is to get more people involved and coming to city meetings. Here's a way to do it without

spending 100k. Tell the city council to treat Rochester residents with the respect they deserve when they come before you all the time and not just election time!
Example 1: the City Council, had eight public hearings on April 17, most to spend millions of our dollars. Rep Tom Kaczynski and myself spoke at those hearings with concerns of overspending the tax cap budget. We have been sticking up for the taxpayer for years and worked hard to get the Tax and Spending cap adopted in 2008.
At the following May 3 City Council meeting, the City Manager and the Mayor spent a half hour with a power point presentation, defending their tax cap overspending. Did they also attempt to discredit us because we dared to question their overspending? A fine welcome to the Rochester public hearing tribunal. 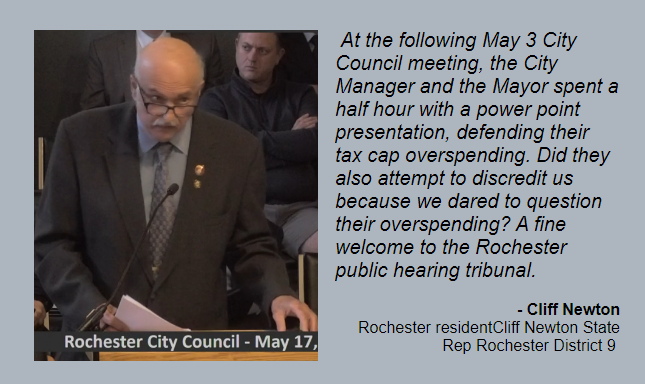 Example 2: May17th another bunch of Rochester Public Hearings all required by law - due process - again spending millions of our dollars. One of the hearings was for the city operating budget. $150 million with $73 million to be taken from our bank accounts by taxation. What does our friendly Mayor do? He limits our due process to five minutes each even though
(1.) there were only a few-7-8 citizens to address the council on the budget
(2.) The budget is around 200 pages of spending and, as a result, thousands and thousands of our savings will be taken from us to fund the budget.
Please understand that those there to testify worked for hours on their public hearing presentation. We expected to be heard by our ELECTED representatives. No time limits, in the agenda, the City Council Public Hearing Rules of Order, and more importantly, no time limitation anywhere in state law for public hearings required by law, at least not that I can find. Yet, the mayor, despite being challenged by me to state where he got the authority to limit due process testimony, and he couldn't cite one, took it upon himself to disrespect his constituents and trample our rights by enforcing one!
"Reason and free inquiry are the only effectual agents against error": Thomas Jefferson!
While very disrespectful, these actions don't bother seasoned political veterans like Tom and me, it only makes us more determined to speak up and ask the tough questions for our taxpaying constituents. However, I can certainly understand where the average person might be intimidated by the Mayor and his actions. No number of "truth officers" will increase participation at meetings, as long as intimidation is the norm. The city government and council's show of blatant disrespect, by limiting information and questions, in essence, silencing WE THE PEOPLE, and even trying to discredit The Rochester Voice in favor of their own government controlled propaganda paper does nothing towards encouraging more citizen participation. It does just the opposite. Because ACTIONS SPEAK LOUDER THAN WORDS! Treat people with respect and listen to them when they speak.
"The only security of all is in a free press." Thomas Jefferson. Treat a free press with its due respect, let them ask questions, then answer those questions. That will make a real difference.