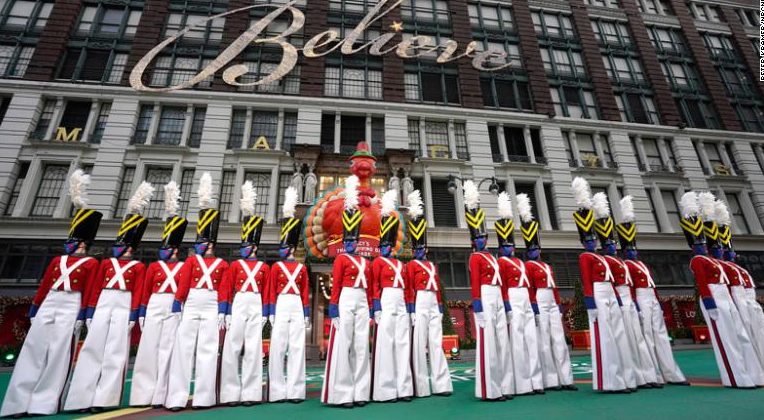 The Rockettes in a tight formation during Thursday's Thanksgiving show during the annual Macy's parade in New York. (Courtesy photo)

While you're hanging out at home today eating some leftover turkey dinner (thank you, Gary Poole and Three Ponds Tavern in Milton), allow us to serve up some irony and hypocrisy to spice up your post-Turkey Day feast.

The Macy's Thanksgiving Day Parade on Thursday was a surreal and bizarre affair this year, with direct public access to the parade route prohibited for this TV-only event.

Organizers as well as NBC touted that this would be a mask-wearing and socially-distanced affair, however it doesn't exactly look like the Radio City Rockettes are socially distanced in the photo above.

Now everyone knows that the "experts" agree that masks are great protection when you are unable to maintain six-foot social distancing. I mean we trust that advice every day when we go to a grocery store where folks reach right in front of our nose to grab a can of corn less than a foot from our face.

So why in the heck did the media spread the narrative that voters going to the polls on Election Day could lead to a coronavirus outbreak, which greased the wheels for Democrat-run cities and states to alter ballot rules and mail out wholesale mail-in ballots that in turn greased the wheels for the upcoming election fraud that was about to be foisted on the American people.

Now we have the mainstream media (write this down: NBC, CBS, ABC, The Washington Post, The New York Times, CNN) that simply refuse to even acknowledge the slimmest possibility of any widespread ballot fraud, without even investigating it.

Globe Spotlight Team, wherefore art thou? Hiding like mold in the dark, dank cellar of journalism? Ironically, The Washington Post's new mantra is "Democracy dies in Darkness." The Washington Post must be hanging out in the cobweb-filled basement where Biden lives.

"Show us your evidence!" they heckle Trump's election fraud team.

But what lawyer in a criminal case, be they prosecutor or defense attorney, tells the media what the evidence is? That's what the courtroom is for.

Besides, the flaccid media has just gotten lazy when it comes to investigating any story that might have a positive slant to President Trump. Remember ever since Trump announced his candidacy for president, the mainstream print and broadcast media have enjoyed a steady stream of leaks and anti-Trump hate speech from deep state Democrats across every sector of the government. There was no need to do an "investigative" piece because from the Democrat paid-for tripe that Trump paid prostitutes to pee on a bed where Obama slept in Moscow to the Access Hollywood tape that featured Trump's lockerroom banter with Billy Bush (where is he now? Hanging out with Matt Lauer?), no investigating into the story's veracity was questioned: "If it's anti-Trump, it's press ready."

When it came to the salacious Moscow story, journalists and pundits on the left all agreed, often using the same narrative, that even though they had no hard evidence, the charge was so alarming, it had to be printed, because if it were true, it could put Trump in a compromised position with the Russians that had to be exposed.

Ironically, now, when confronted with well-founded allegations of widespread voter fraud - coincidentally mostly in five or six battleground states where Democrats are in control - the media has no appetite for even reporting on the allegations, unless it is to disparage the effort.

Why wouldn't they apply the same philosophic principles that they did to the Russian hoax: that even though there is no evidence, the charges are such an existential threat to our Democracy, that they must be thoroughly investigated.

No, nothing to see here, say the headlines. It's time for Trump to concede and for the country to heal and move on, say the editorials. Now onto the coronation of Joseph Biden, who will be forever beholden to the Chinese for the millions of dollars paid to his son, Hunter.

But in the headlines the day after Trump was elected in 2016 they curiously weren't so quick to say, "It's time to move on, for the country to unify."

No, it was how can we get the electoral college to vote for Hillary Clinton despite Trumps' victory.

In fact, Hillary Clinton is still doing a "They stole my election" tour. She'll gladly come talk to your garden club or civic group for a couple of buck, I think.