Memorial Day prayers for pardon for a Rochester hero 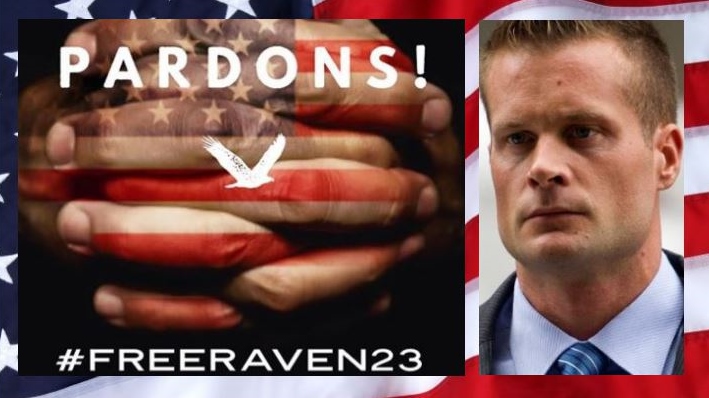 A meme on today's Free Rave 23 Facebook page; right, Evan Liberty during his trial in 2015.

Recent reports that President Trump is considering a number of pardons of military men accused of war crimes is fueling hope for the release of a Rochester native convicted in the Nisur Square civilian massacre in Iraq in 2007.

Evan Liberty, 36, who joined the Marines while still taking classes at Spaulding High, ended up attaining the coveted position of a Maine Embassy Guard before going on to work for Blackwater, a security firm that in 2007 protected U.S. contractors and diplomats in Iraq at the height of the war.

Liberty's conviction in the so-called Nisur Square massacre led to his imprisonment at a federal facility in Pennsylvania where he has languished four and a half years.

Evan Liberty's father, Brian, told The Rochester Voice on Sunday that hearing all the news about possible Trump pardons is gratifying, but he steels himself against what may be false hope.

"When he walks out the door of that place in Pennsylvania I'll believe it," he said. "Until then I don't want to get too high or too low."

Evan Liberty's mandatory 30-year sentence for using an automatic weapon during the Nisur Square incident was tossed by a U.S. appeals court in August 2017 in a split decision, the court finding it "cruel and unusual punishment."

The defense has noted from the start of the trial that Liberty and two others similarly accused were supplied the weapons by the Department of State as they were charged with protecting U.S. diplomats and were doing so on that September day in 2007.

After the sentences were vacated a resentencing was supposed to happen about a year ago but that still hasn't worked its way through the courts. Meanwhile, Evan Liberty, remains incarcerated at the federal prison in Minersivlle, Pa., where things most folks take for granted are just not allowed.

"You know Evan hasn't seen the night sky in four and a half years," said Brian Liberty, who noted, however, that his son is always on an even keel despite his circumstance.

"If you talked to him in there, the way he talks, you'd never know he'd been in prison four and a half years," he said.

The Nisur Square incident occurred in the early days of the U.S.-led Iraq war that toppled Saddam Hussein. But shortly after the euphoria of ridding the country of the hated despot, anti-American Iraqi factions used guerrilla tactics, IEDS, car bombs and woman- and child-toting explosive devices to kill American servicemen and contractors looking to help the country develop its fledgling democracy.

The events leading to the incident began the afternoon of Sept. 16, 2007, when a powerful bomb went off outside the Green (U.S. Safe Zone) Zone and a Blackwater team escorting a diplomat had to get back as fast as it could. Evan Liberty's tactical support team went off to block off a traffic circle to keep traffic back (during the first team's escape)."

As what appears to be civilian traffic mostly either slowed or turned back, a white Kia driving on the wrong side of the road approached the roadblock where Blackwater Team Raven 23 was securing the circle.

Evan Liberty and three others charged in the attack, then say what appeared to be Iraqi police began firing at Raven 23, initiating a furious exchange that federal prosecutors later said left at least 14 Iraqi civilians dead and many more wounded.

Three in the case - Liberty, Paul Alvin Slough, of Keller, Texas; and Dustin Laurent Heard, of Maryville, Tenn. - were sentenced to 30-year mandatory sentences, while a fourth, Nicholas Abram Slatten, of Sparta, Tenn., was sentenced to life in prison for murder after two manslaughter trials failed to convict him.

During the appeals process the government's prosecution of the case has been shown to be blatantly prejudicial, even withholding exculpatory evidence in several instances.

Last summer during Slatten's retrial the government for the first time noted that enemy combatants opened fire on the Blackwater units first after arguing that Blackwater guards fired first during the original trial.

Slatten's defense lawyers said at his third murder trial he was picked out for prosecution to protect then Vice President Joe Biden who'd promised Iraq in 2010 that Americans would be held accountable for the massacre.

Meanwhile, the drumbeat of fascination with the case continues on Tuesday with an eight-part podcast.