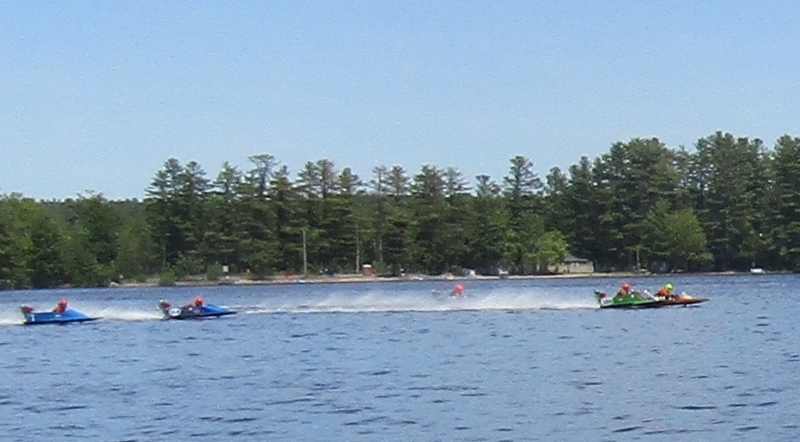 The first two to cross the start line, Ken Terry of Long Island, green boat, and Jeff Sherwin of Goffstown finished first and second, too, with Terry winning the heat by a whisker. (Rochester Voice photos)

MILTON - Several hundred turned out to watch a record number of hydroplanes race on Saturday in the annual Three Pond Challenge on Townhouse Pond, part of Milton's annual Summer Kickoff.

It was by far the most successful event of recent years with the large crowd taking in a sparkling day on the beach while watching the small powerboats plow through a slightly choppy Townhouse Pond.

Race Director Steve Noury of the South Shore Outboard Association said the western end of Townhouse Pond, where racers made their final turn before heading for the finish line, was a bit tricky.

"You're best bet is to be the lead boat, that way you have less to worry about," he quipped.

This is a daredevil sport that has a wide array of enthusiasts, among them Grace Lyons, 11, who took third place in her division in her first-ever hydroplane race.

"It was scary on the turns, but fun on the straightaways," she said.

Running in a separate division were New Jersey natives 72-year-old Al Sharphouse and his son, Michael.

some five decades ago, then stopped after he became a father, but when his son decided to begin racing a couple of years ago, "I thought I'd come back and race again, too."

Al Sharphouse said the hydroplanes 50 years ago were almost as fast as they are today (top speeds around 65), but the design has changed making them more efficient.

Milton Parks and Recreation Director Karen Brown said she was thrilled with the crowds for the event, by far the largest in recent memory.