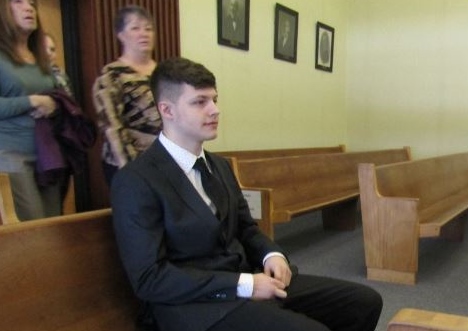 DOVER - The Milton teenager whose violent threats and actions forced a school shutdown at Nute last March pleaded guilty Friday to two misdemeanor charges of criminal threatening in connection with the incident but was allowed into a diversion program for the most serious charge of felony reckless conduct.

Guerdon Zerbinopoulos, 18, of Milton Mills, was sentenced to two 12-month terms in Strafford County Jail on two criminal threatening charges, with both suspended for three years on good behavior. The sentences run concurrently.

As part of the felony diversion program, Zerbinopoulos will have to write letters of apology to all the victims. He will also have to participate in 50 hours of community service and undergo any counseling or training as directed by corrections officials.

The March 6 incident began when Zerbinopoulos, who had previously dropped out of school at Nute, entered the building and was allowed access to the main office, but refused to leave and entered a hallway of the school. After being ordered to leave by administrators he finally ran out of the building after a student and was locked out, police say. He then proceeded to hit the outside of the building with his hands and feet, then got in his car, revved the engine and drove toward the building's pillars, stopping just short of hitting them, police said.

A Milton Police affidavit filed in mid-March and unsealed in May showed that Zerbinopoulos threatened to drive his truck into the school's front entrance and almost hit his ex-girlfriend as she stood between the truck and the entrance in an effort to stop him.

The affidavit also revealed that Zerbinopoulos threatened Nute High and Middle School Principal Jan Radowicz saying he would "smash her face" as she sought to intervene in events that led up to the lockdown.

Zerbinopoulos was arrested on felony reckless conduct and several enhanced misdemeanors for criminal threatening in a school. He was indicted on the felony charge in May.

The affidavit filed by Milton Police Chief Richard Krauss said he was called to Nute High on March 6 for a former student inside the building who refused to leave, and that when he arrived, Zerbinopoulos was inside his truck in front of the pillars at the main entrance of the school.

Krauss immediately placed Zerbinopoulos in handcuffs and got him into the rear of the cruiser, after which he went inside to further investigate.

His investigation revealed that staff including Radowicz and Assistant Principal Jen Leavitt had asked him to leave multiple times but he had refused.

Then after he chased two students out of the building, he was locked out and began kicking, punching and throwing his weight at the doors to get back in.

Finally, it was learned that he drove at the building, stopping just short of hitting it.

The next day, March 7, Krauss returned for follow-up interviews and learned that Zerbinopoulos had threatened to smash Radowicz' face and threatened to kill Radowicz, Leavitt and his ex-girlfriend.