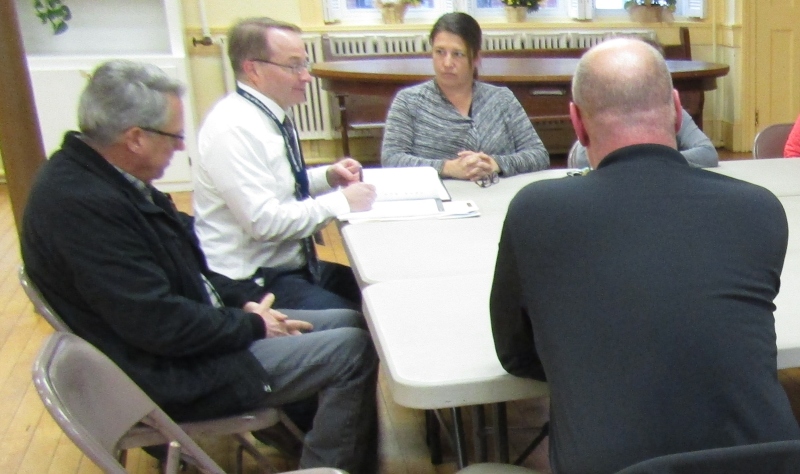 Jim Campbell, head of the city's special site committee, left in white shirt, discusses the review process with members of the board and John Burns of SOS, right. (Rochester Voice file photo)

ROCHESTER - Rochester's head of the city's special site committee told The Rochester Voice on Tuesday he was preparing a draft agreement with SOS Recovery Center that would approve their continuing operation contingent on their agreement to comply with a handful of requests from the board.

Jim Campbell, head of special site committee in charge of assessing a minor site plan review application submitted by SOS, said most of the stipulations formed by his board were discussed with SOS and First Congregational Church officials at a Nov. 12 meeting.

He said they include:

Providing for a maintenance plan for the grounds surrounding the church and SOS offices.

Provide emergency contacts for police and fire in the event of an emergency.

Allow Rochester Fire to follow up with a mandated third-party review to ensure there are not code violations inside SOS offices.

Get a health license for on-premises food consumption. They currently don't cook on premises, but they do occasionally have pot luck dinners, which would still require proper licensing.

Require that no clinical or medical stuff are allowed at SOS.

Campbell said he would be finishing his draft and delivering it to SOS Recovery Director John Burns in a matter of days for his approval.

Campbell said after an amicable meeting held last week between city, SOS and church officials he's confident it will be approved.

"From our conversations at that meeting, we feel it's going to be approved with the conditions we talked about," Campbell said.

If Burns approves the committee's recommendations, it would resolve a yearlong court battle over the city's demand for a minor site plan review of the downtown addiction counseling nonprofit.

After SOS resisted filing a minor site plan application in September 2018 the city shut it down after which SOS filed an injunction that allowed it to stay open.

The court squabble continued for a year with both sides filing dueling lawsuits in Strafford County Superior Court.

SOS Recovery, which also has centers in Hampton and Dover, is affiliated with Goodwin Health of Somersworth.