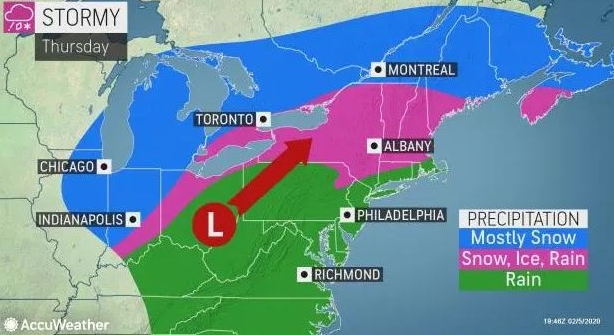 What could prove the most treacherous travel of the year is in store for the Greater Rochester area today as a mix of snow, ice and freezing rain could coat the roadways at various times.

As of 6:30 a.m. a steady snow continues with a full coating on the ground and unplowed roads.

Rochester Schools were canceled via a tweet sent around 5:45 a.m.

Forecasters predict a continual mix of snow, ice and freezing rain throughout the day and Friday morning.

With temps hovering in the low 30s much of the day with a wind chill in the 20s, motorists are advised to be cautious going over bridges and back roads where icy spots could pop up without warning.

Only an inch of snow is expected today, but local amounts could be vastly different over the region, with snow heavy at times. A total of 3-6 inches is predicted for the Northern Seacoast.

Sleet and freezing rain will continue tonight with lows in the high 20s and a wind chill around 23.

Expect Friday to be more of the same with freezing rain beginning early morning and lasting till rush hour and then the storm ending as it began, with a few hours of snow finishing up around noon when temps will stand right around freezing.

During the icing portion of the storm enough precip is expected to coat tree limbs and utility wires, which could lead to power outages in some spots.

The slow-moving storm could also lead to localized and street flooding.

Accuweather material was used for this report