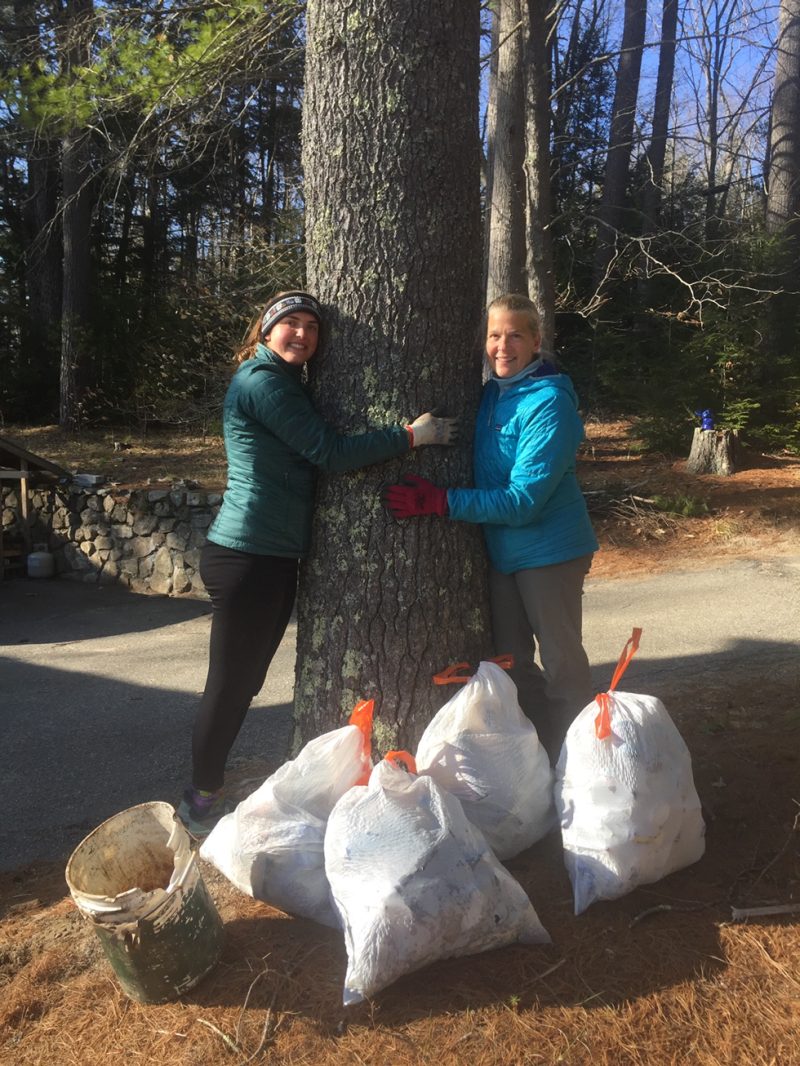 Lia Darling, lleft, her mom, Jillian, show their appreciation for nature after picking up several bags full of litter on Brackett Road in Sanbornville. (Courtesy photo)

It was different from a typical MMRG event, which usually features a small crowd of people gathered around a naturalist or forester, or taking a forest walk together.

Instead, participants spread out on streets in their hometowns in order to keep safe social distances. People chose their own day and time to take part but all were part of the team effort to beautify their towns and neighborhoods by picking up roadside litter and trash.

"We were thrilled at the response," said Kari Lygren, MMRG Educational Outreach Coordinator. "More than three dozen people participated over the course of several days. That matches the number attending many of our popular outings or workshops. Cleanup volunteers signed up from every one of the seven towns we serve."

Participant feedback was positive and showed that people were pleased with what they had accomplished. Many submitted photos of the trash bags they filled, along with notes about the types of litter they found. Several people pointed out that they do this regularly, not just on Earth Day. Maureen Knepp remarked, "I try to maintain one mile of Kings Highway in New Durham. As a runner, I have to look at this [litter] as I train, running our roads. Instead of complaining about it, I do something about it!"

Jill Palmisano had similar comments and suggested that the cleanup be a quarterly endeavor. Others, such as Rachel and John Towne in Milton Mills, expressed appreciation for neighbors who had already picked up their streets: "We were mostly beat out by Nancy Gauthier. Great job, Nancy!"

Several participants thanked MMRG for making it happen. Mary Ulinski of Sanbornville wrote, "Thanks to MMRG for your efforts heading up this much needed project to help keep our towns looking beautiful!"

The day was gratifying in other ways too. MMRG Board Chair Nicole Csiszer and her husband Jim Cowles picked up Mountain Road in Brookfield. Csiszer remarked, "We picked up two 13-gallon bags of trash. People stopped in their cars to thank us. And I got to meet neighbors I didn't know."

MMRG's Earth Day cleanup was complemented by several parallel cleanup efforts. The Town of Milton Department of Public Works sponsored its own cleanup day on April 25, in which the Town picked up full blue bags left along roadsides; families of Cub Scout Pack 155 energetically joined in that effort.

Branch Hill Farm coordinated a pick-up along Applebee Road in Milton Mills and filled approximately thirty bags. The Brookfield Conservation Commission resurrected its traditional Earth Day cleanup, attracting a couple dozen participants, and the Town of Wolfeboro held a cleanup the following weekend. The positive effects even spread beyond MMRG's region. Forester Charlie Moreno, a frequent MMRG workshop presenter, inspired a group of his neighbors in the town of Strafford to pick up litter on their roads as well.

Virginia Long is the public relations coordinator for MMRG