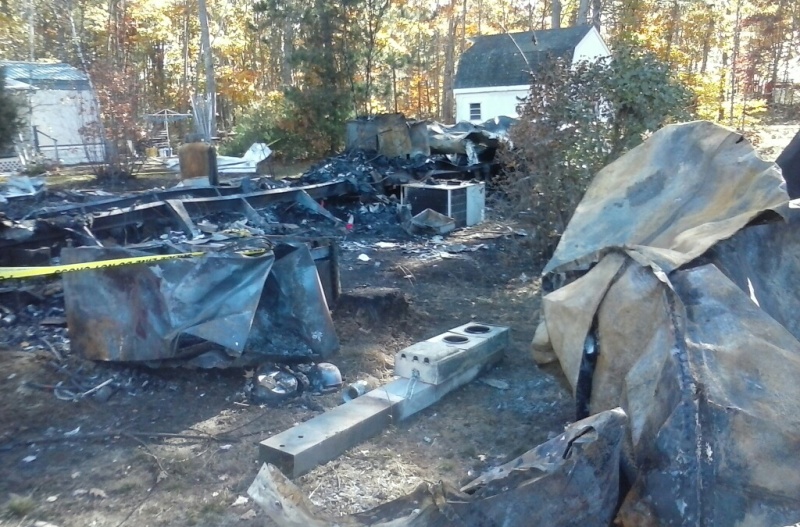 The fire that claimed the life of a Rochester woman demolished the mobile home in a matter of minutes. (Lebanon Voice photo)

ROCHESTER - The cause of last week's fire that obliterated a Rochester mobile killing claiming the life of an elderly woman will likely never be known, a Rochester Fire investigator said today.
Deputy Chief Tim Wilder said the cause of the fire is "undetermined" due to the scope of the destruction, which saw the mobile home leveled in a roaring fire that consumed it in mere minutes around 3 a.m. on Wednesday.
An autopsy to determine the cause of death and confirm the woman's identity has still not been completed.
While some news outlets have released the woman's name, The Lebanon Voice will not pending official notification, which should be available soon, Wilder said.
Elizabeth Sawyer, who lives across the street from 21 Whispering Wind Lane where the fire erupted, said after she called 911, she rushed to a mobile home next to the victim's house to awaken the neighbors so they could get a safe distance from the raging inferno.
She said the neighbors, in turn, kept a careful eye on the mobile home on the other side of the victim's home, because the elderly woman there was hard of hearing and never did get up as the home beside her burned to the ground.
When Rochester Fire arrived around 3:10 a.m. the structure was fully involved with a partial roof collapse.
Mike Cook, who lives down the road, said when he heard the firetrucks he walked down to see what was going on.
"When firefighters got here, there was little they could do but watch it burn," he said. "They put the hoses on it, but that was it. I never saw anything burn so fast in my life."
Sawyer said the victim was in her mid-70s and suffered from poor health and often was up through the night.
"She was a nice woman," Sawyer said.
Safety officials believe the fire and death were accidental.
Wilder said safety officials are also awaiting the result of toxicology tests before releasing the cause of death.