Mom served her country, too, and helped build Dad's ships 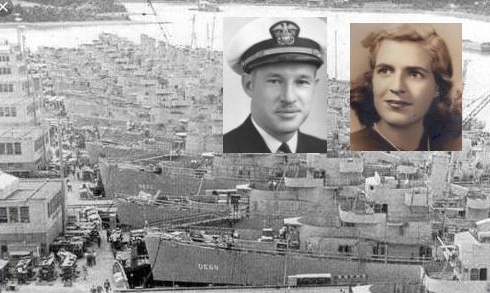 The first intersection of my parents' lives came well before they were married or even met.

It came when she was a shipbuilder at the Bethlehem Hingham Shipyard in Hingham, Mass.

Lalla Brown Sargent had just turned 21 when the Japanese bombed Pearl Harbor. It was only months later that the Bethlehem Shipyard began churning out Destroyer Escorts, "Tin Cans," the sailors called them, because the early versions were said to have hulls as thin as tin cans.

My dad, David Jones Thorp, joined the Navy as soon as the war broke out. He didn't want to go into the Army, he used to joke, because he'd heard they had lousy food.

A recent graduate of the University of North Carolina at Chapel Hill, he was commissioned as a lieutenant commander (LCDR) and led a gun crew onboard his ship, a destroyer escort.

Meanwhile, the woman who would be my mother was getting up before light and taking the streetcar the eight miles from South Hingham to the shipyard, which was less than four miles from the Fore River Shipyard in Quincy, Mass., which built the bigger Navy ships like the battleships USS Massachusetts and USS Springfield and USS Salem as well as the Navy's first carrier the USS Lexington.

Soon after the war the country went to double daylight saving time so they could work later into the afternoon and evening to build tanks, planes and ships, including the 290-foot convoy escorts my mom was building.

My father spent most of the war in the North Atlantic escorting merchant ships to Great Britain.

He didn't talk much about his Navy service, but did occasionally upon repeated requests tell us one tale, describing an encounter with a German U-boat one foggy night in the North Atlantic.

I can hear him telling it to this day, and it went like this.

We were out there and we knew they were down there and they knew we were up top waiting for them. When they finally had to surface for some reason they were very close and some of their men began shooting at us through the fog, and, well, we sort of had a little gunfight with pistols and rifles in the middle of the ocean. We were too close to use our big guns, but we still had more firepower. It didn't last long and they gave up pretty quickly.

That was the whole story.

After the war in Europe was over he became Captain of a DE in the South Pacific Theater. Even after the war with Japan was over he continued his service going from island to island to either coax or use fire power to get the Japanese, many of whom refused to surrender, to come out peacefully.

Those several different "Tin Cans" he served on or commanded those five years carried him safely through the war, and it's very likely my mom had a hand in that, too.

To me, the women who built those planes and tanks and ships were just as important to winning the war as the men who fought and served on them.

So I salute and remember them both today, not only as wonderful parents, but as heroes of the greatest generation.