Motion to dismiss Verrill case set for June; if it's denied trial expected to start in July 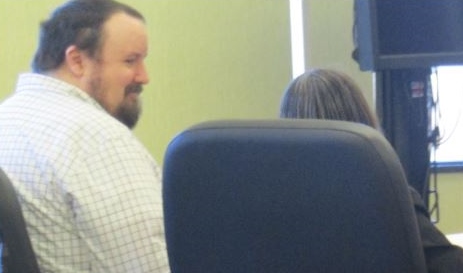 Accused murderer Timothy Verrill smiles as he chats with defense lawyer Meredith Lugo on Friday, a day after a mistrial was declared. (Rochester Voice file photo)

DOVER - The retrial of a Dover man accused in a Farmington double homicide in 2017 won't start till this summer, the lead prosecutor in the case said today.

But before the retrial of Timothy Verrill can begin, another motion to dismiss the case will be brought before Judge Steven Houran by Verrill's defense team.

"The motion to dismiss was to have been heard sometime in May, but now it looks like it will be sometime in June," said Senior Assistant Attorney General Geoff Ward.

Ward said that due to the pandemic they're still playing it by ear with the scheduling, so no firm dates for either the motion to dismiss or a possible trial have been set.

Verrill, 37, of Dover, is accused of first first-degree murder in the Jan. 27, 2017, deaths of Christine Sullivan, 48, of 979 Meaderboro Road, Farmington, and Jenna Pellegrini, 32, of Barrington. He faces life in prison without parole if found guilty.

His first trial in October ended with a mistrial due to a large amount of potential evidence held by police that wasn't shared with Verrill's defense team.

Following the mistrial Ward, along with others on his prosecutorial team, pored over reams of emails, documents and video and audio files to ensure the defense team would have access to everything state police have.

The defense also asked that the discovery effort be widened to include evidence from a separate ongoing drug probe of convicted drug dealer Dean Smoronk, 57, the longtime boyfriend of Sullivan and owner of the home where she was killed.

During the October trial defense lawyers sought to portray Smoronk as the orchestrator of the killings if not an active participant.

Verrill remains held on no bail while awaiting trial.

Smoronk, who has never been named as a suspect or person of interest in the killings, is currently serving a 42-month sentence at MDC Brooklyn in New York for meth trafficking. If he stays on good footing with jail officials, he could be out as early as December 2021.