Mr. Mayor, 5-minute rule at public hearings insulting to those who foot bill 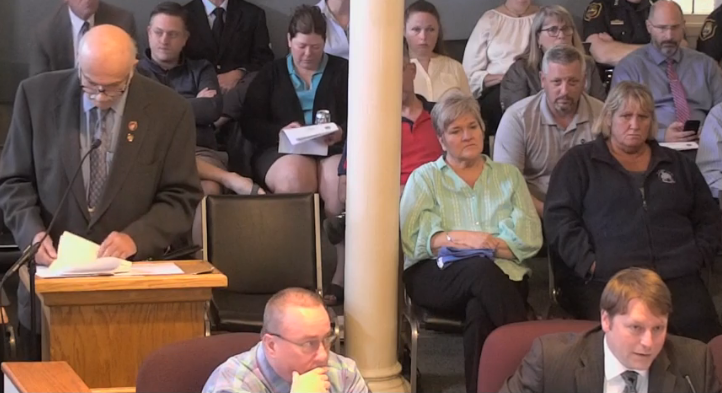 Why do we have public hearings? A public hearing is obligatory when due process is required. Taxpaying citizens took the time to show up to address the City Council with their budget concerns. We all spent a lot of time preparing our questions and statements as you can imagine because there are a lot of items in a $150 million dollar budget.
How were we treated? We were limited to 5 minutes each to speak. FIVE MINUTES! Both State Law and Council Rules of Order are silent on the time limit on required public hearings. Something about due process perhaps? So where did Mayor Callaghan come up with limiting concerns with a proposed $150 million budget to 5 minutes?

Why have public hearings at all? Because a public hearing on the budget is obligatory when due process is required, The purpose of a public hearing is to receive citizen input and feedback, for us to give instruction and let our elected council know of our concerns of how we want OUR money spent. Yet, Mayor Callaghan took it upon himself to restrict our due process to 5 minutes and cut off citizens from being fully heard. Again, where did he get this authority to do this? It's not in state law. It's not in City Council Rules of Order Section 1.7 Public Hearings. He took it upon himself to stifle WE THE PEOPLE who were there to testify on the budget, Are we starting to see a pattern here with his type of "strongarm" governing, which was first witnessed at the Rice "mock trial" and now at the budget hearing.
Again, a public hearing is obligatory when due process is required. Taxpayers have standing, in this case $73.2 million dollars of standing. We were denied due process when Mayor Callaghan denied us the right to be heard in full. Why? It can't be to save money. Public hearings don't cost a lot in terms of staff and money. Public hearings testimony isn't time limited by law so it can't be that either.
And, it wasn't like there were a 100 people at the hearing to speak. What does that leave? Was hearing from the people footing the bill not worth the time it would take to do so? No patience to hear the taxpayers list of concerns even though $73.2 million is being taken from us. If we were allowed to testify in our entirety, the public hearing might have lasted what, another half an hour at most. That isn't worth 73.2 million? Shame on you Mayor Callaghan for your strongarm tactics to the taxpaying citizens of Rochester at denying us our due process rights at the public hearing on the 2022-2023 proposed budget.