N.H. doctor: 'If you're younger you can get it, and you can die from it'; Market Basket to limit in-store customers 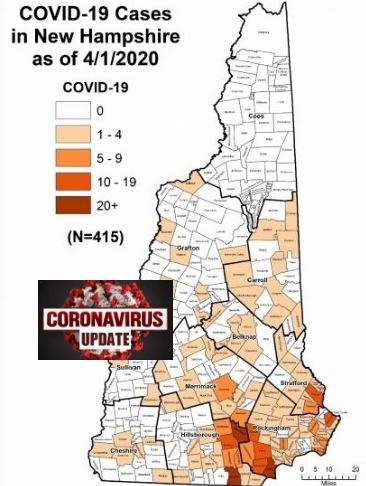 CONCORD - State health officials announced on Wednesday that the state had recorded its fourth COVID-19 death, a Sullivan County woman over 60 who had underlying health conditions.

Locally, Rochester is still listed in the 1-4 range of those testing positive. Neither city officials nor their public information office have disclosed any new cases. City Councilor Doug Lachance is the only resident who has tested positive. He is now free of the virus after spending several days at a Boston hospital last month.

Regionally, Dover has 10-19 positive test cases while Farmington and Barrington are in the 1-4 range. Milton has no recorded cases.

Strafford County's total number of positive cases is now at 30, up two from the previous day.

"They are getting it, that's always been the case," said Dr. Stahl. "We didn't talk about it because we wanted to focus more on the older folk. But yes if you're younger you can get it, and you can die from it. There are fatalities in younger people."

In a recent graph produced by Massachusetts health officials they listed COVID-19 positive test resulted by age groups as follows:

Statewide, DHHS on Wednesday announced 48 new positive test results for a total of 415 cases of COVID-19 diagnosed in New Hampshire.

Eight of the new cases were hospitalized for their illness; thus far, 58 (14%) of the 415 positive cases have been hospitalized.

Fifteen of the new cases have no identified risk factors, meaning they are likely community-based transmissions.

Other New Hampshire case numbers include:

Persons Being Monitored in NH (approximate point in time) 1,325

In Maine statewide, they have seen 376 confirmed cases as of Wednesday, with 68 hospitalized and 94 recovered with seven deaths.

Market Basket announced on Wednesday that beginning today they will be limiting the number of customers in the stores at one time.

Here are the major changes to expect, according to a Market Basket press release.

* The number of customers shopping at one time will be limited, based on the size of the store, to ensure customers have personal space and can practice social distancing

* A single entrance and exit will be designated for customers' use. All fire safety measures will remain in place.

* Upon entrance, each shopper will be greeted by an associate who will clean and sanitize a carriage for them.