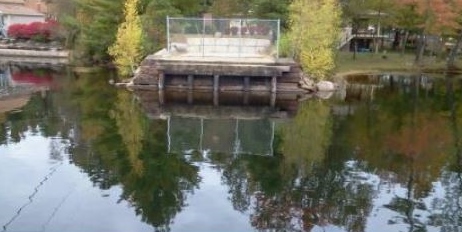 The span was removed in 2012 due to liability concerns. (Rochester Voice file photo).

After being told three years ago that replacement work on a bridge connecting Townhouse Road in Milton and New Bridge Road in Lebanon was scheduled to be completed in fiscal year 2019-20, a New Hampshire DOT planner now says the span won't likely even begin to be built for another two years at the very least.

Oh, and by the way, the estimated $1.4 million dollar price tag projected in 2016 has ballooned to $3 million.

CR Willeke, a DOT municipal highways engineer, said on Monday that New Hampshire, which is overseeing the bi-state project with the town of Milton and the state of Maine, hasn't even begun design work that can take two years to complete.

"No design work has been done. Even if we were to start tomorrow, it's a two-year wait," Willeke said. "We might be able to beat that by a little, but it's not likely."

Willeke said the logistics of working with both the town of Milton and the state of Maine makes everything more cumbersome.

While Maine owns its half of the bridge outright, state DOT officials have urged Lebanon to contribute some dollars to the project to help expedite its replacement, and Lebanon has complied by earmarking some funding for the bridge in November 2017.

However, Willeke on Monday spoke of only two agreements, one with Milton, who will pay 10 percent of the replacement cost; and Maine, which he expects will pay 50 percent.

Milton, meanwhile, has also earmarked funds for the replacement project.

But none of those financial agreements have been completed, and design work won't begin until they are.

Meanwhile, New Hampshire continues to work on securing federal dollars for their share of the cost, hoping to tap into a fund earmarked for bridges whose low traffic numbers don't meet federal guidelines for grant money.

The revelation that a bridge replacement project is still two years away comes as a shock to many since former New Hampshire DOT engineer Nancy Mayville said in August 2016 that the bridge was scheduled for replacement as soon as July of this year.

The Milton side of the old bridge was removed in October 2012 soon after liability concerns surfaced following a Maine DOT engineer's comments that the decking was "punky" and "tender."

Vehicle traffic was prohibited in 2011.