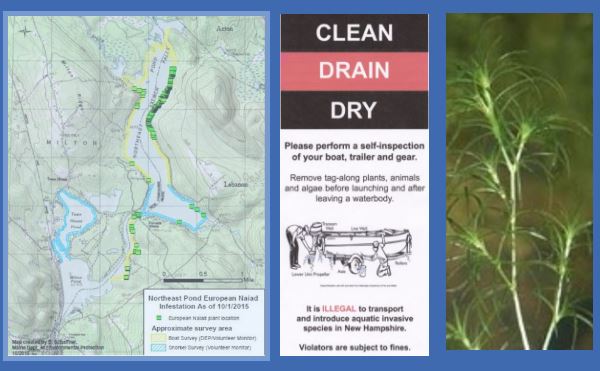 The fast-growing and aggressive aquatic weed threatens MTP and its delicate ecology of native fish and flora as well as its recreational cache and local property values, especially along the lakefront in both Milton and Lebanon.

The vigorous battle against the European Naiad will continue in earnest later this month with a one-day application of an herbicide in an area of Northeast Pond that is most infested.

Meanwhile, boat ramps at Everetts Cove Marina in Lebanon and Milton Town Beach are inspecting boats and urging boat owners to make sure their craft are clean and free of the weed before entering the water.

The date of the herbicide application has not been released, but McPhedran said the department will make sure people know in advance.

The herbicide, with a brand name of Reward®, has the active ingredient diquat dibromide, which will be applied "via subsurface injection through perforated hose from a surface watercraft into a 41-acre area of Northeast Pond," which comprises 685 acres all together.

According to data released to The Rochester Voice, the area in which the herbicide will be used stretches along the east side of Northeast Pond toward the Salmon Falls River.

McPhedran said the area, which is all in Lebanon, has the "highest density Naiad growth that we have seen.

"It's an area we removed manually (last summer) but determined we could not significantly reduce the population without the herbicide," he said earlier this spring.

The application will be carried out in one day using a two-person team and a single surface water craft, he said.

McPhedran said the herbicide has no restrictions on swimming, but he would advise the public not to swim on the day of treatment. Boating should be OK, but he would again, simply advise against any possible contact with the treatment or treatment area.

"There is no restriction on swimming on the day of treatment," he stressed on Friday. "But we advise that as an added safety measure, just to eliminate any potential for accident with the (application) boat."

McPhedran said afterward, Maine DES will monitor the herbicide levels in the area until it can no longer be detected.

New areas of infestation in Milton Pond include the coves above Trainor and Pleasant Point roads and at the northermost tip of Pleasant Point in Lebanon; and just north of Depot Pond Road in Milton.

As far as the long-term prognosis on the Naiad in Milton Three Ponds, McPhedran said it was too early to tell.

Manual means of eradicating the Naiad include sucking the weeds out or laying down underwater tarps that block sunlight the weeds need to survive.