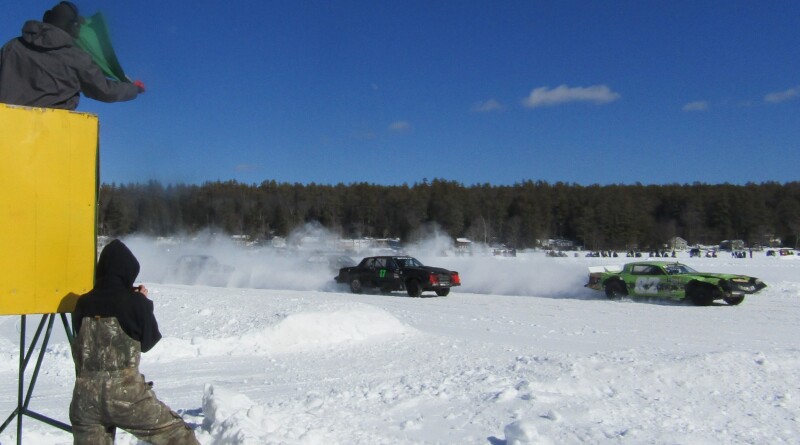 Gage Osborne of Plaistow waves the green flag to start a Stocks B race, with Jacob Michaud of Lebanon, Maine, getting off to a quick lead he would never relinquish. (Rochester Voice photos)

MILTON - After several years of little or no ice racing the New England Ice Racing Association is having a banner year on Milton Three Ponds.

The track on Sunday was in pristine condition with stocks, front and rear wheel drives and modifieds all screaming around the Northeast Pond oval at speeds up to 60-70 mph.

But there's much more to do at the ice track than just watch the racing. Many bring their snowmobiles and quad racers to scream around the lake or just cruise with their kids. Others bring their grills and set up for an afternoon of tailgating, food and food. Two food trucks were also on hand with 10-15 to a line on average.

Together the good ice, a warming sun, a cloudless sky, the fun and the winter doldrums are bringing out the huge crowds.

"This has been our best season in five years," said Sharon Copp, who's been with the association for more than 30 years. Her husband, Jeff Copp, is the association's president.

Sharon Copp attributed the huge crowds they're seeing to the combination of a long cold winter snap and the pandemic keeping people housebound.

"This is a great outdoor activity for families and kids," she said.

Last week's ice racing saw its biggest crowds of the season with 320 cars admitted onto the ice. On Sunday afternoon as racing began Copp estimated there were many more than that already.

An hour and a half later the line onto the ice was still backed up 10 cars.

Matt and Tiffany Souther of Lebanon, Maine, were at their second NEIRA event with their son, Matt, nine months.

"We really enjoy coming out to this, it's great fun," said Tiffany Souther.

Matt Souther also races a dirt bike at the track in a nontrophied exhibition class.

Among the trophy winners on Sunday was Jacob Michaud of Lebanon, who was racing in the Class B stocks division.

Also racing in the division was his wife, Jessica, who came in last after she lost one of her tire chains.

"It's OK, I beat him last week. That was a bad day after that," she quipped.

Cost per car is $10. To avoid the lines get there early.