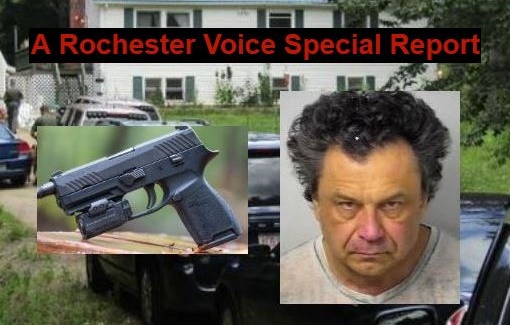 CONCORD - In a bombshell development, The Rochester Voice has learned that a reputed Farmington drug dealer whose home was the site of a grisly double homicide in 2017 has been indicted on drug trafficking charges by a U.S. District Court grand jury.

The indictment, which was filed on Jan. 9, accuses Dean Smoronk, 57, formerly of 979 Meaderboro Road, of trafficking in five grams or more of "methamphetamine, its salts, isomers, and salts of its isomers" between sometime in early July and July 12 of last year in "New Hampshire and elsewhere."

The indictment comes as a complete surprise, since the feds had never announced such a drug arrest, despite having taken Smoronk into custody in December on a charge of being a felon in possession of a firearm as part of a Strafford County drug sweep. Smoronk is accused of trying to sell a Sig Sauer P-320 9 mm originally stolen out of Milton.

An indictment on that charge was expected last month, prosecutors had indicated to The Rochester Voice.

The U.S. Attorneys office on Friday had no immediate comment on the status of the weapons charge indictment, however it did release of copy of the drug indictment, which also listed Laurel Bennett, a/k/a, Laurel Cole, as a co-conspirator.

The Rochester Voice could not immediately confirm any further information on Bennett's arrest or hometown.

In another surprise twist, a public affairs spokesman for the South Carolina Attorney Generals Office said that Smoronk is due in court there for his alleged involvement in a meth trafficking and bomb-making arrest in 2014.

Spokesperson Robert Kittle told The Rochester Voice on Thursday that Smoronk is due in court there on April 1 with a jury trial set for May 13.

"If he doesn't show up for his April appearance, we'll issue a bench warrant," said Kittle, who noted that Smoronk's lawyer had told them he'd lost contact with his client.

Smoronk has never been implicated in the killings, however he does have a record of drug involvement, including the arrest in South Carolina with his now-deceased girlfriend in 2014; and in June 2017 when he was arrested on Interstate 95 in Virginia for drug possession.

He returned to New Hampshire last June a couple of months after his release from a Virginia jail.

A week later at a probable cause hearing in U.S. district court it was determined he should be held without bail. He is being held at undisclosed location, prosecutors have said.

A hearing in federal court on the weapons charge had been set for Jan. 22, however The Rochester Voice was unable on Friday to ascertain the current status on those charges.

Meanwhile, U.S. Court records also show that Smoronk filed for Chapter 13 bankruptcy proceeding on Aug. 30, but that the order was dismissed on Dec. 17 due to noncompliance.

Records at Farmington Town Hall in December indicated that Smoronk currently owes about $19,000 in back taxes on his Meaderboro Road property.

In April 2017 the state of New Hampshire declared Smoronk a known drug dealer as part of its effort to seize more than $14,000 in cash from Smoronk's Farmington home. That petition was tossed out of court because the state was somehow unable to get the forfeiture petition to Strafford County Superior Court on time.

State Police seized the cash on Feb. 3, 2017, after it was found during the execution of a search warrant at Smoronk's home.

According to court documents police found $10,318 in cash in two separate pouches of a black carry-on bag in the basement and found another $3,828 in a red, white and black flower bag in the master bedroom.

However, it wasn't until April 3 that the forfeiture petition was mailed - not delivered - to the Strafford County Superior Courthouse in Dover, resulting in its being filed on April 5 when it was received around 5 p.m., a day after the 60-day time window for such a notice.

The specific RSA that dictates the time frame is (318-B:17b). It states, "The department of justice shall, within 60 days of the seizure, file a petition in the superior court having jurisdiction. If no such petition is filed within 60 days, the items of property interests seized shall be released or returned to the owners."

Smoronk is said to be facing up to 10 years on the weapons charge. Sentencing guidelines on the most recent drug indictment weren't immediately available.

Meanwhile, Timothy Verrill, 36, of Dover, the man accused in the deaths of Sullivan and Pellegrini, is expected to have his trial in May in Strafford County Superior Court.