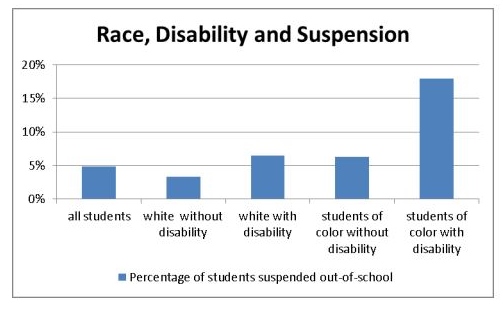 Date from the 2016 UNH Carsey School of Public Policy report.

The new bill would allow students to bring suit in the superior court of any county statewide, whereas previously they would have had to seek redress in federal court.

The new law also forces school districts to create new policies on how to reduce discrimination in schools, and what to do in the case of an incident among a group that might be protected.

The law was created based on the urging of the Governor's Advisory Council on Diversity and Inclusion.

Much of the impetus for the bill arose in the wake of a UNH Carsey School of Public Policy Report on out of school suspensions in New Hampshire public schools that affected a hugely disproportionate of students of color and those with disabilities. Those and other statistics were highlighted in a Justice Reform Project Report.

The governor said the bill provides a strengthening of protections that already exist.

"SB 263 continues our work to ensure that New Hampshire is a place where every person, regardless of their background, has an equal and full opportunity to pursue their dreams and to make a better life for themselves and their families," Gov. Sununu said. "By signing this bill, we are extending anti-discrimination protections, which already exist under current law, to students in public schools. Our children are the future of this state, and they deserve nothing less than the same protections provided to adults in housing, employment, and public accommodations."

Critics of the bill have complained the language may conflict with current school policies, that it could lead to a spate of lawsuits in county courts and that transgender students could realize an advantage on sports teams.

Sununu, in a statement on Thursday, said he was aware of the concerns of unintended consequences and that he would be monitoring implementation of the bill, which takes effect in September.

"I have listened carefully to those who have expressed concerns regarding the impact of this bill and potential unintended consequences," Gov. Sununu said. "My team will work closely with the Human Rights Commission and Department of Justice to monitor the bill's implementation and bring forward proposed changes in the future should adjustments prove necessary."