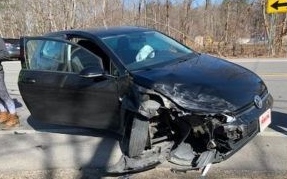 ROCHESTER - A Newington man was injured in a three-car crash at the corner of Salmon Falls and Whitehall roads on Saturday.

Police say Kelleher attempted make a left onto Whitehall Road and collided with a Volkswagen Golf driven by Victoria LaPorte, 19, of Penacook who was headed south on Salmon Falls Road.

LaPorte's car struck the rear passenger side quarter panel of the Jeep, which was nudged into a Lexus GX 470, operated by Todd Gagliano, 57, of Newington, who was stopped at the stop sign waiting to enter Salmon Falls Road.

LaPorte was taken to Frisbie Memorial Hospital with what were described as non-life threatening injuries.

The accident remains under investigation. If anyone has information about this incident they are asked to contact Officer Dwayne Hatch at 603-330-7128 in reference to 20-174-AC.