Newspeak no longer the thread of a novel; it's a threat to our nation 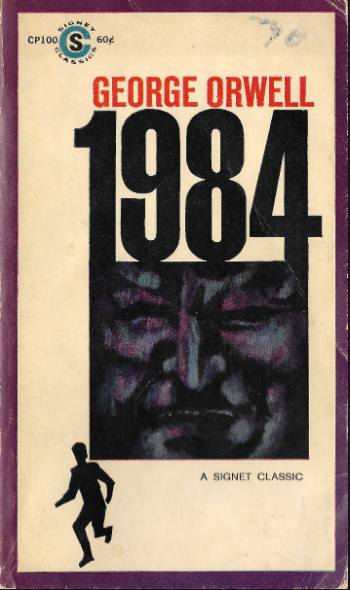 Do you believe that our Constitutional Republic under which we cherish openness, freedom, and democracy can possibly unite if one half of the voices of the country are silenced while news media assumes the character of propagandistic newspeak; and, the thought police root out dissenting opinions?

What occurred at the Capitol Building on January 6th is despicable. Make no excuse for those criminals. It is events since that fateful day that should be of most concern.

Americans have suffered a tumultuous past 5 years under the political climate created by our leaders and fostered by the media. It is now time to look at the past - free of political motive - and determine the causes of our current condition to ensure the past 5 years are NOT ever again repeated. Only constructive criticism will allow America to become a far better place.

Newspeak is a term which George Orwell aptly portrayed in his novel, 1984. Essentially newspeak is designed to limit free thought and promote the governing party's doctrine.

During the Senate Hearings, Senator Cruz proposed 3 alternatives - one to vote for all electors; one to vote against certain electors; and, thirdly, appoint a commission (as in 1877 to constitutionally resolve that disputed Presidential election) to hear the 2020 allegations of fraud as 39 percent of all Americans - Democrat, Independent, and Republican - believe fraud existed in the election. The proposed commission would send their conclusions BACK to the states for the states to decide upon their electorate. If you listen to the original Cruz speech, you will know that to be true. This was NOT a proposal for the House or Senate to overturn the election.

I extensively researched the internet and did not find mention of that THIRD option by any mainstream media source. Rather, the mainstream media as well as N.H. Sen. Jeanne Shaheen accuse elected members of the legislature of corrupting our Constitutional process and offering the American people only two options. Each of those two options the media reported address only one half of the country's needs and leaves the other half to doubt the integrity of our electoral process. Third option WOULD HAVE supported ALL Americans - not the doctrine of a single party. Newspeak?

Because of that Newspeak, major corporations which are too numerous to name, including, but not limited to Marriot, Amazon, Blue Cross, Hallmark, JP Morgan Chase, Citigroup, Comcast, General Electric American Express, 3M, Verizon and Airbnb will make no donations to the GOP for pursuing the same 1877 process prescribed by the Constitution. Congressional Democrats challenged the electorate of Republican Presidents in 1969, 2000, 2004 and 2016. The corporate cancellation to the GOP is an effort to silence ELECTED leaders of half of the country and ensure one party Democratic political control in the future.

Authoritarianism is the favoring or enforcing strict obedience to authority at the expense of personal freedoms. Since January 6th, Twitter has banned the leader of the free world from his platform while the Ayatollah and Chinese Communist Party remain. Due to limited print space, I will not discuss the violence the Ayatollah advocates or the violence of the CCP against its own people as well as the CCP statement claiming U.S. military spread the coronavirus in Wuhan.

Amazon fostered strict obedience to its political party of choice at the expense of personal freedom when it denied Parler access to its platform. Parler WAS the fastest growing group on the internet. Amazon has effectively silenced 75 million voices because of their dissenting opinions and eliminated its and Twitter's major competitor.

Forbes magazine ran an Op-ed advising all major corporations to NOT hire conservative public servants not because of their achievements, knowledge, and value - but based purely upon political affiliation.

I never imagined as a young woman while reading George Orwell's 1984 that the United States of America would become that dystopian society.