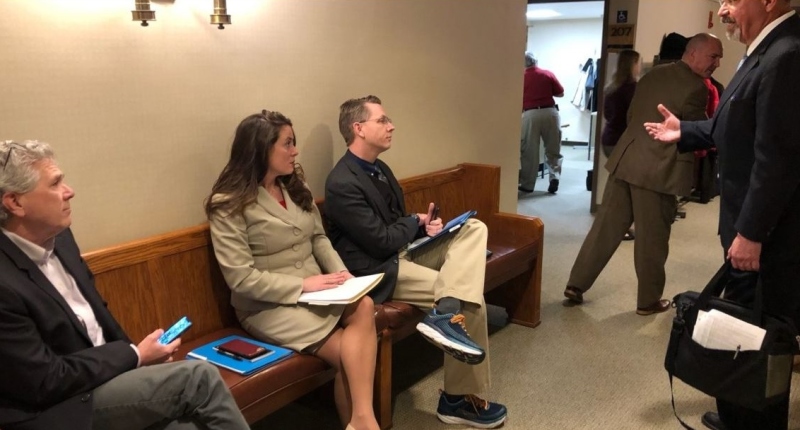 CONCORD - Calling it unconstitutional, the state's media came out in force Wednesday to testify against a bill that would require them to update criminal stories online whenever charges are dropped, or the defendant is acquitted.

State Rep. Jack Flanagan, R-Brookline, the sole sponsor of House Bill 1157, told the House Judiciary Committee that it would require news organizations to immediately update such stories following an acquittal, dismissal, or a finding of not guilty.

"I've had constituents that had situations where they were found not guilty," Flanagan said before the hearing. "Some of the news media updated (stories). They have great policies. Others refused to do it."

Flanagan said the media can ruin lives in their coverage of criminal cases. While he had a related personal incident years ago, Flanagan said, it was the stories from constituents that inspired him to write the legislation.

Brendan McQuaid, president and publisher of the New Hampshire Union Leader, said the bill would violate the Constitution. A free press is crucial to democracy, he said.

Speaking on behalf of the New Hampshire Press Association, McQuaid said the organization voted unanimously to oppose the bill.

"For a free press to remain free, publishing decisions must remain firmly with that free press and not be dictated legislatively," McQuaid said in his prepared statement.

McQuaid told the committee he deals on a weekly basis with calls from individuals who have had their names connected to a crime show up online, sometimes after a Google search.

McQuaid said the bill would not be able to control Google or any out-of-state media that picks up a story and publishes it online.

Members of the legal community and the media testified the bill is unconstitutional. The bill would not impact printed news, nor could it control out-of-state publishers.

The bill "requires a news media to update, retract, or correct an Internet published article about a criminal proceeding following an acquittal, dismissal, or finding of not guilty."

If the media fails to do so immediately after written notification, it "shall result in the liability of the New Hampshire news media organization for any damages incurred by the person caused by such failure," the bill states.

In the hallway outside the hearing room, Flanagan told McQuaid and others that it might be a good idea to sit down and talk about the issues that brought the bill forward.

Scott Spradling, a former television reporter who represented the New Hampshire Association of Broadcasters at the hearing, said the bill represents a violation of the First Amendment.

The issue of "compelling" the media to act has been addressed by the U.S. Supreme Court in the case of Miami Herald Publishing Company v. Tornillo.

The court ruled that state and federal governments are prohibited from legislating what stories the media may publish.

Marissa Chase, representing trial attorneys across the state for the New Hampshire Association for Justice, said the bill would be an infringement on the Constitution.

Kimberley Haas, a Union Leader correspondent and member of the New Hampshire Press Association's Legislative Committee, said most reporters do "whatever it takes to follow criminal cases to the end."

Most newsrooms have policies and a practical interest in updating the stories they have been covering, if, for example, someone was acquitted of a crime, she said.

"There are policies in place to make sure (someone's) reputation is protected," Haas said.

Haas concluded: "We do not think that anyone purposely proposed this law to violate the U.S. Constitution, but we do think the House Judiciary Committee should be aware that it could potentially violate the media's First Amendment rights."

Joe Haas of Gilmanton, who regularly attends and records Executive Council meetings, said he was against the bill because it is a violation of the First Amendment.

Tony Schinella, an editor of NH Patch, said the practical impact of the bill could mean that an editor could return to work from vacation to face a lawsuit.

Schinella said complying with the bill, if it became law, could take weeks and hours of reporting time at a courthouse to verify. The news media does not have that sort of time in some cases, Schinella said.

Not speaking, but signing up in support of the bill were State Rep. Peter Torosian, R-Atkinson, Rep. Bob Greene, R-Hudson, and Rep. Linda Gould, R-Hudson.