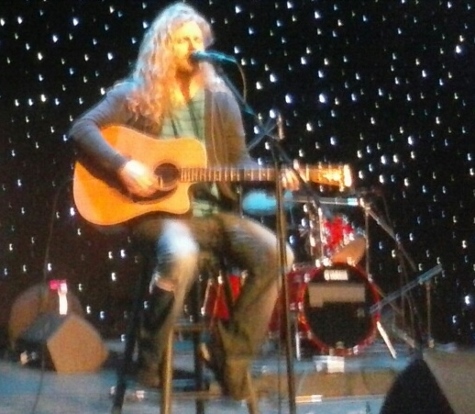 ROCHESTER - Suffice it to say that the energy level at the Rochester Opera House smelled like grunge spirit on Friday where a couple of hundred fans of the famed late rocker Kurt Cobain were treated to an inspired performance by the tribute band Nirvanish.

With songs like "Drain You," "Comes as you are", and "Rape Me" being performed in Cobain's signature guitar shredding riffs along with heavy bass and solid drumming, it didn't take long for an impromptu mosh pit to form in the orchestra seating area in front of the stage.

And when they played "Smells like Teen Spirit", the mosh pit bobbed up and down like pogo sticks everyone with their hands in the air with the "rock on" sign.
The Cobain lookalike, blonde locks, crouching guitar playing antics and ripping chord style aside, had an eerie vocal resemblance to Cobain as well, belting out screams and tender lyrics that kept the crowd rocking and mesmerized.

The crowd was also treated to a heartfelt acoustic set midway through the program before the band returned to its deafening electric set to end the performance.

And the band played on, running off Nirvana hit after hit as well as deep track after deep track for almost two hours.

And well they should have. These guys left it all on stage.

Bravo. We hope we get another chance to see them at the ROH next year. Check them out at nirvanish.com.