No search committee to replace Frisbie CEO planned for now 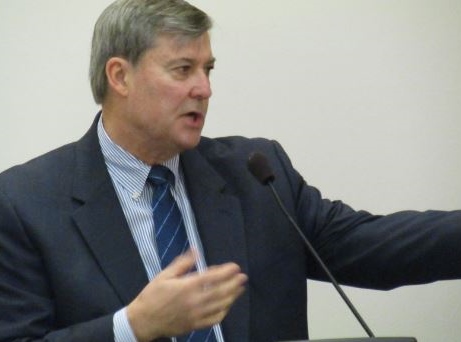 ROCHESTER - It was only last Wednesday that then-Frisbie Memorial Hospital CEO and president John Marzinzik took to the podium at Frisbie's Conference Center to warmly welcome Greater Rochester Chamber of Commerce members to their annual breakfast meeting.

Holy Rosary Credit Union President and CEO Brian Hughes, who is the Chairman of the Board of Trustees at Frisbie, did not comment on Monday regarding whether or not Marzinzik's retirement had been planned or was a spur of the moment decision, however many would say it was more likely the latter since Marzinzik never circulated an internal statement to hospital employees as would be expected under a typical planned retirement scenario.

Last Wednesday an enthusiastic Marzinzik spoke to the crowd at the chamber meeting about the difficulties of a new billing and information system, but said when all the kinks were resolved the hospital would have a state-of-the-art medical-information platform.

If you go to one of our urgent care facilities with a medical issue and then come to Frisbie later in the day, we'll know exactly what happened at the urgent care center, he noted. He also added that every hospital would be going through the same tough sledding and that Frisbie was out in front of the pack.

Marzinzik also was instrumental in implementing the policy of police carrying Narcan, an opioid overdose antidote, and making it more accessible to heroin users.

It was just last month that Marzinzik was touting a youth peer counseling program for teens on weeknights at the Rochester Community Recovery Center.

Marzinzik was only president and CEO at Frisbie for three years, having been appointed in January 2015.

He had been on staff at Frisbie since 1993 when he was hired as senior vice president and chief financial officer by Al Felgar, Frisbie's former CEO.

Asked if Hughes thought the hospital would form an immediate search committee to look for a new president and CEO, he said rather, "We are not engaged in a search process and focusing right now on a continuation of leadership and highlighting that Dr. Caple has the skillset and institutional knowledge that will help Frisbie move forward."