No sporting chance: City OKs Keno, but it's thumbs down on sports betting 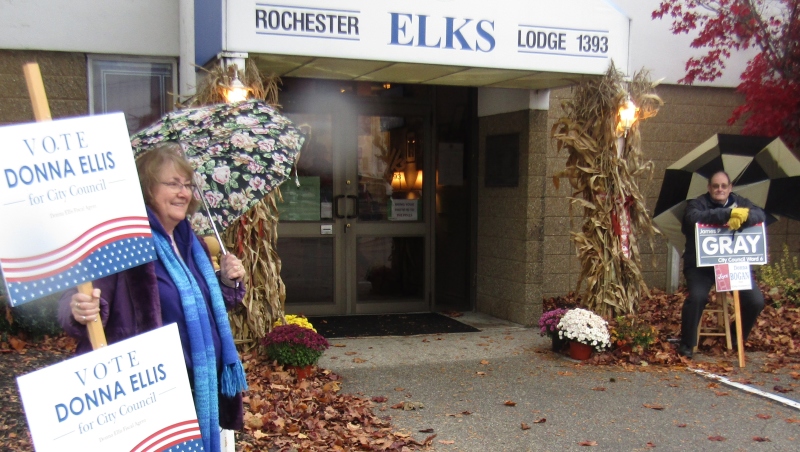 Rainy days and Tuesday: The polls at the Elks and throughout the city saw a thin turnout on a cold, damp day. Above, Donna Ellis and Jim Gray wait to welcome voters, who were in scant supply. (Rochester Voice photo)

ROCHESTER - Rochester's mayoral race may have lacked drama with incumbent and unchallenged Mayor Caroline McCarley cruising to victory, but her City Council saw a sea change with three incumbent councilors ousted by younger challengers and the return of former mayor Doug Lachance to the City Council chambers to fill the seat of the city's longtime deputy mayor who retired.

Incumbent City Council members who lost seats included Sandra Keans, who lost her Ward 2 Seat B slot to Palana Belken, 342-300; Geoffrey Hamann, who lost his Ward 4 Seat B race to challenger Laura Hainey, 324-184; and Ralph Torr, who lost his Ward 5 Seat A slot to Christopher Rice, 276-152.

Lachance, the other new face at the table, ran unopposed for his War 1 Seat B spot after Coucilor and Deputy Mayor Ray Varney retired.

Councilors returning to the table include Ward 1 Seat A's Jeremy Hutchinson, who beat back challenger Bruce Cory, 374-107; Elaine Lauterborn, who kept her Ward 2 Seat A spot with an easy win over Warren Sprague, 416-199; Pete Lachapelle and Thomas Abbott of Ward 3, who both ran unopposed; Donna Bogan, who cruised by Edwin Walker, 312-85 for her Ward 6 Seat A spot; Jim Gray, who held off Donna Ellis, 232-174 for Ward 6 Seat B; and David Walker, who was unopposed in his run for another term in the Ward 4 Seat A slot.

The race that proved the most dramatic was for the Ward 5 Seat B vote, where former City Council member Donald Hamann edged Milton Police Chief Richard Krauss, 179-165, in a three-way race. Shon Stevens finished a distant third with 62 votes.

Turnout, which is traditionally down on a nonpresidential voting year and even more at risk in inclement weather, was downright dismal, with only 14 percent of the electorate taking part on Election Day.

Meanwhile, in other races, the Police Commission remained intact, with Lisa Stanley, Derek Peters and David Stevens all running unopposed; and Matt Beaulieu won the only school board at large spot.