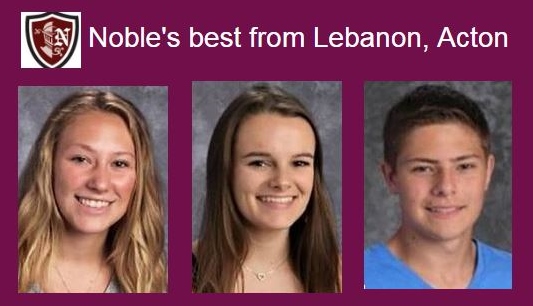 From left, Alyssa Goodwin of Acton and Andrea Guernon and Ben Wiggin of Lebanon. (Courtesy photos)

Jarrod Rudis, son of Robert and Mary Rudis of Berwick, is the Valedictorian of the Noble High School Class of 2018 and a Summa Cum Laude graduate. Jarrod was the Maine Gifted and Talented Student of the Year, received the Phi Beta Kappa Award, and the Maine Principals Association Award. He was a three-time Maine State National Honor Society 1st place winner. Jarrod was a member of the soccer team and the outdoor track team, a French mentor, a member of Project Search, the student body President of the Student Council, a referee for the Berwick Recreation Center and also President of both the French Honor Society and the National Honor Society. Jarrod plans to attend the University of Maine, Orono in the Fall. He hopes to obtain a PhD in Astrophysics/Quantum Mechanics and would like to do graduate work in Theoretical Physics.

Andrea was a member the lacrosse and field hockey teams. She is receiving a STEM diploma endorsement for all of the science courses in which she enrolled and excelled. Andrea served as a kindergarten Jumpstart helper, a chemistry tutor, and a chemistry teacher assistant. She was inducted into the National Honor Society and was a member of Project Search. Andrea plans to study Biomedical Science: Medicinal Microbiology at the University of New Hampshire in the fall.