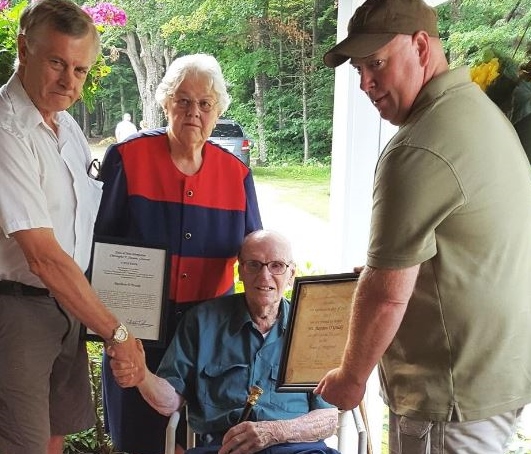 STRAFFORD - Stephen O'Grady of Strafford, who was born the same year the Coast Guard was established as a military branch and a US Patent was awarded for the iconic Raggedy Ann doll, has died at the age of 104.

Thought to be the oldest living Northern Seacoast resident, O'Grady died on Saturday after a brief illness, according to his obituary in The Rochester Voice.

O'Grady, who grew up in New Bedford, Mass., moved to Strafford to live on the Kerivan family farm in 1980.

He was 101 when he received Strafford's Boston Post Cane, awarded by the former Boston Post newspaper to many New England towns that would award the cane to a town's eldest resident.

O'Grady served in the Army during World War II.

He moved to Strafford after retiring from New Bedford School Department where he worked as a custodian in the same school and position his father had.

O'Grady, an avid Patriots fan and viewer of TV game shows "Jeopardy" and "Price is Right," leaves behind several nephews and many great nieces and nephews, according to his obituary.

No family members were able to be reached for this report.

Family and friends may visit Friday from 10-11:30 a.m., at the R.M. Edgerly & Son Funeral Home, 86 South Main St., Rochester. A Mass of Christian Burial will follow at 1 p.m., at Our Lady of Lourdes, 20 River St., Pittsfield, with burial to follow in Calvary Cemetery, Norris Road, Pittsfield.