'Not a day goes by he isn't missed by so many' 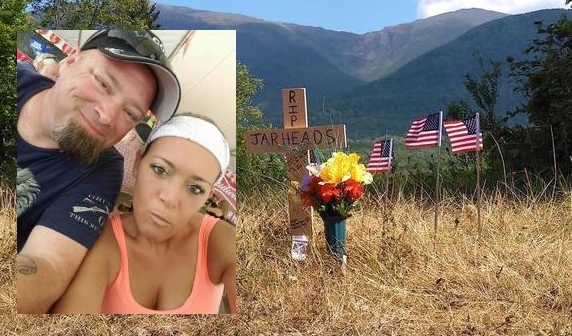 A tribute for Aaron Perry at the site where he died; inset, Perry and Kristy Frye share a selfie moment. (Courtesy photos)

This weekend is going to be a hard one for Kristy Frye of Farmington.

"It's hard to believe it's been a year since the horrific accident that took my best friend," Frye said on Wednesday. "Not a day goes by he isn't missed by so many."

Seven motorcyclists were killed and three injured in the June 21 crash when a pickup truck hauling a trailer collided with the group on a rural, two-lane road in Randolph.

The bikers were largely composed of members of a motorcycle club of ex-Marines called the Jarheads who had just left their Randolph motel and were en route to the Gorham American Legion for a meat bingo and charity event when the accident occurred on Route 2 around 6:30 p.m.

The driver of the pickup, Volodoymyr Zhukovskyy, 24, who is facing seven negligent homicide charges, remains jailed in Coos County while awaiting trial.

A recent toxicology report released by the state indicated that Zhukovskyy had fentanyl, morphine and cocaine in his system at the time of the crash.

The other victims were identified as Michael Ferazzi, 62, of Contoocook, Albert Mazza, 59, of Lee, Daniel Pereira, 58, of Riverside, R.I., Joanne and Edward Corr, both 58, of Lakeville, Mass., and Desma Oakes, 42, of Concord, who was Perry's girlfriend.

Frye said she recalled hearing the horrible news of Perry's death like it was yesterday.

She said she tries to find comfort in his loss by remembering what a great guy he was with her friend Tony Ryder, who owns a garage - Triple R Complete - in Rollinsford, where Perry used to hang out.

"I find myself reminiscing with Tony a lot," she said. "Aaron was a major part of our close family and since his passing there is an emptiness in all of us. I miss his daily text, bike rides, time at the shop."

She said Perry loved to work on cars and did it often at Ryder's garage. The close-knit group called themselves the Milton Crew.

Frye traveled to memorialize the site of Perry's death just days after he was killed and told The Rochester Voice soon after of the surreal moment when she got out of her vehicle near where it happened.

"As we were standing there, I walked to a spot where some blue paint was spray painted and said, 'This is where it's going to go,'" she said. "Then a (police) officer came over and said to me, 'This is where Aaron died.' I literally fell to the ground."

Perry, 45, was a father of three and grandfather to a baby girl.

Frye said she'd known Perry since she was 12, having grown up on Chestnut Hill Road in Farmington just two miles from his house.

She said he'd moved to California, but returned to Farmington about six or seven years ago where he'd become part of the tight-knit group of friends.

She said Perry, who went to high school at Spaulding, was the one who kept the crew amused.

"He always had a smart-ass comment no matter what the situation, he always had us laughing," said Frye.

She called Perry an All-American brother, who was "there for me and his friends, day or night."

Frye said she's taken trips to the spot where Perry died several times this past year.

"I just miss my Aaron so deeply," she said. "I have been to the crash site over the past year several times, and I feel him so deeply there."