Not naked and not afraid: Lebanon resident gets a shot at 'Price is Right' riches 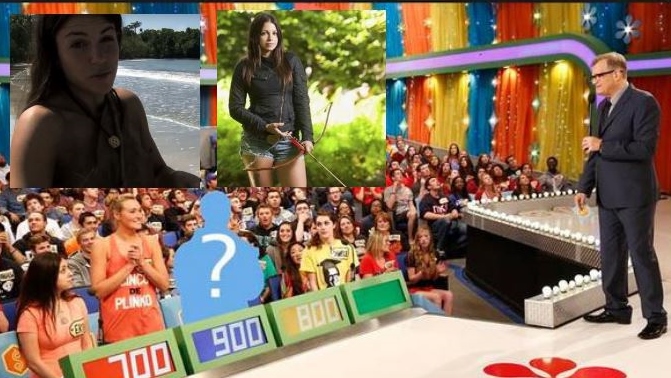 Drew Carey gets ready to have another contestant called to play the 'Price is Righ.; insets, Laura Zerra on a 'Naked and Afraid' segment, an image portraying her primitive survival skills. (Courtesy photos)

Laura Zerra of Lebanon, Maine, is a veteran reality TV star on Discovery Channel's "Naked and Afraid," an Instagram sensation with 25,000 followers and a renowned primitive survivalists whose skills run the gamut from cooking up some delicious road kill to eating a raw fish or worm when the need arises.

On Tuesday she'll be doing something a little less dangerous but nonetheless something that should still bring out her competitive juices; she'll be looking to beat several other contestants on the "Price is Right" to take home a grand prize.

The chance to get on the show came several months ago when she was visiting cousins in San Diego, Calif., she said during a telephone conversation with The Rochester Voice from Montana last week.

"One of them asked if I wanted to go to a taping and I said yes, I loved that show growing up," said Zerra, an accomplished farrier, who has lived at Belgian Meadows Farm on Merchants Row for a little over a year.

"When we got to (the LA studio where it is taped) there was a long line," Zerra said. "Everyone was in a great mood, there was so much energy in that line."

Zerra said when they called her name to "Come on down" she didn't even hear it the noise inside the studio was so deafening.

"It was so surreal," she said. "My cousins are jabbing me in the ribs and saying, 'your name! your name!' I leaped out of my seat and went down."

Zerra is prohibited from saying how she did on the show, but did say it was a fantastic experience.

"Just going and being there was a bucket list moment, never mind being called down," she said.

Zerra, who grew up in Western Massachusetts, said her book, A Modern Guide to Knifemaking, will come out on Amazon in July.

A primitive survivalist, who spent three stints on Naked and Afraid, Zerra has been interviewed by TMZ and is even listed in IMDb, an Internet tracking base that lists movie, TV and reality stars among others.

She's also appeared in The Real, a talk show; and Buffalo Battle, a TV movie, as an activist.

When she was interviewed by The Rochester Voice she was in Montana and was preparing to travel to Brazil, but said she'd be back in Lebanon in about 10 days.

"I fell in love with Lebanon when I first arrived," she said.

Consult your local listings to see when the CBS game show airs on Tuesday.