Now on tap for Rochester: Your very own brewpub in downtown Gonic 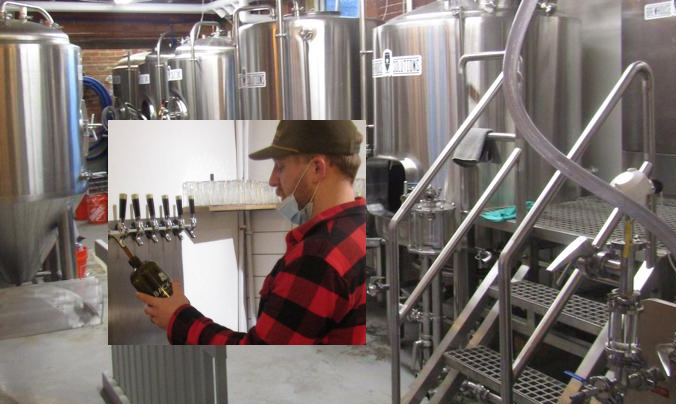 Some of the six vats currently in operation at Back Hill Beer Company inside the Gonic Mill; inset, Peter Laplante draws a Growler on Thursday. (Rochester Voice photos)

ROCHESTER - To watch Peter Laplante draw a freshly brewed beer is to watch a man truly living the dream.

You see Laplante is passionate about beer: about drinking it, making it and watching people enjoy it.

A couple of years ago the former Hancock man and his wife decided two things. They wanted to live near the seacoast and they wanted to start a brewpub.

"I'd been doing home brewing for about 11 years and loved it, so we thought, 'if we're ever gonna do it, it's gonna be now."

Well, they moved to Dover and opened up Back Hill Beer Company in the Gonic Mill, the perfect backdrop for an authentic brewpub in an authentic working-class, blue collar city like Rochester.

On Thursday, when for now the pub is closed except for to-go service, Laplante served up "Growlers," 32-oz tankards filled with intriguing brews like "I'm Not Yelling Stout" or "3 times Warm Brown Ale" or "Triple Crown Blonde Ale" to a steady stream of customers.

Among them was Ben Baker, who owns a business at the Mill.

His favorites? Pretty much all of them, "but I really like the 3 Times Warm Brown Ale, the I'm Not Yelling Stout and the Blonde Ale," he said, adding he currently held the record for Growler sales.

Laplante currently has six taps but plans to add more.

To brew his beer he uses six vats, each with two-barrel brewing, enough brewing capacity to enable a couple of new beer varieties every week.

"We will have an endless variety for your taste buds," he says proudly.

Once the beer is brewed it's sent off for the fermentation process, which takes about three weeks.

Speaking of fermentation, the alcohol by volume content varies widely, from 4.4 percent in his blonde ale to 7.3 percent in one of his IPAs. That's compared to 5 percent in a Bud.

For many beer aficionados the varietal flavors of blondes, stouts and IPAs are complemented by the differences in ABV, noted Laplante, who got the name for his brewpub from a special hill on his family farm in Hancock.

"There was a hill behind the barn that we always just called the 'Back Hill,' and it became a very special place for me, a place of refuge," he said. "This is an extension of that passion."

Laplante said the city of Rochester has been very welcoming in its embrace of his efforts to open his brewery.

"Rochester officials really gave us an amazing start in helping us feel a sense of of community," he said.

"The most successful destination cities have two things: a riverwalk and a brewpub," Scala said on Friday. "We couldn't be happier."

Laplante made his opening quietly about a month ago as he looks to ramp up his business model to be in concert with the logistics of beer making.

They also have a short list of beer-friendly snacks on hand such as soft pretzels with beer cheese (pretzels made locally by crosstown partner Potter's Bakery), queso nachos, a charcuterie (meat board) and a warm nut mix.

Laplante said anyone who comes to Back Hill will know right away that this is a place very special to him that he wants to be special to his patrons.

"I love the idea of a local place where people can go to unwind, meet people, and have that elevated experience," he said. "I know how much we care about beer, but we're not snobby. This is a judgment free zone."