One hurt in three-vehicle chain-reaction collision 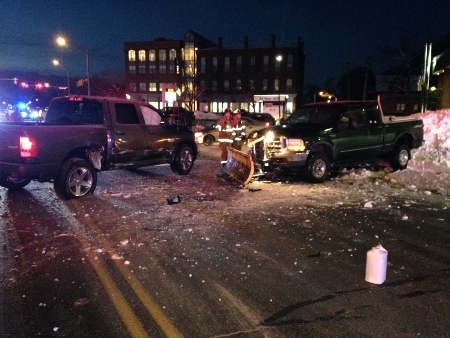 ROCHESTER - A Rochester man was injured this morning in a chain reaction accident that began on South Main, traveled through a bank parking lot and ended on Columbus Avenue.

Rochester Police responded around 6:20 a.m. to the intersection of South Main and Columbus where they learned that Kenneth Rudolph, 60, of Rochester, was traveling southbound on South Main Street and turning left into the entrance of Service Credit Union when his 1999 Ford F-250 with a plow attached struck the curb with the blade. The resulting jostle caused Rudolph to accelerate across the parking lot and exit onto Columbus Avenue, police said, where his truck struck a 2016 Dodge 1500 being operated by Ronald Nason, 57, of Rochester.

The impact caused Nason's vehicle to strike a 2012 Chrysler 200 in the adjoining lane which was operated by Patricia Lopes, 40, also of Rochester.

Rudolph, who was not wearing his seat belt, was transported to Frisbie Memorial Hospital with what were described as nonlife-threatening injuries. The other two drivers were not injured.

A portion of Columbus Avenue was closed briefly while the accident was investigated.