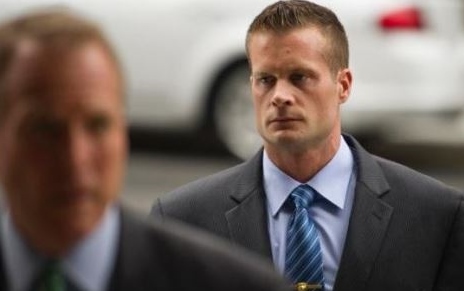 Evan Liberty outside a Washington court prior to his being found guilty in 2014. (Courtesy photo/AP)

As Rochester welcomes Christmas and all its joy of the holiday, family and friends, one Rochester family longs only for the return of their son, a Rochester native and highly decorated Marine, who is wrongly imprisoned for a crime he didn't commit while in service to his country.

Evan Liberty, a graduate of Spaulding High, who was a standout shooting guard for the Red Raiders basketball team and joined the Marines his senior year prior to graduating, is serving a 14-year sentence in a federal Pennsylvania prison on charges that he killed several Iraqis during the so-called "Nisour Square Massacre" of 2007.

However, in the years since he was convicted in 2014, his defense team and those of his three co-defendants have found massive amounts of malfeasance among federal prosecutors and are hoping a petition now being circulated online will inspire President Trump to do the right thing by Blackwater security team Raven 23, of which Evan was a member.

For her part, Liberty's mom, Debra Liberty of Rochester, has often shied away from commenting on the case, but just two days ago she uploaded a personal message on YouTube that urges everyone everywhere to let the president know this is a wrong that has to be made right.

"For the last five plus years our family focus has been getting Evan released from prison where he does not belong and back home to the family that loves him," she says in the minute-long video.

Brian Liberty, Evan's dad, said the backing of recently pardoned Clint Lorance, who had been convicted of second-degree murder in Afghanistan in 2013, has been a great voice supporting pardons for Raven 23.

Brian Liberty also credited the Justice for Warriors Caucus headed by Congressman Duncan Hunter of California and Louis Gomer of Texas. The group is dedicated to issues related to accused or imprisoned combat warriors who have been treated unfairly by the military justice system.

"I think we're turning the corner on this, with Clint," said a cautiously optimistic Brian Liberty today.

The case has already begun moving in the right direction after an appeals court tossed the original sentence imposed by federal judge Royce C. Lambeth of Washington, who originally gave Liberty a 30-year firearms sentence for using an automatic weapon, even though that weapon was issued to him by the U.S. Department of State to help him provide security for diplomats visiting Baghdad.

The Nisour Square incident occurred in the early days of the U.S.-led Iraq war that toppled Saddam Hussein. But shortly after the euphoria of ridding the country of the hated despot, anti-American Iraqi factions used guerrilla tactics, IEDS, car bombs and woman- and child-toting explosive devices to kill American servicemen and contractors looking to help the country develop its fledgling democracy.

It began the afternoon of Sept. 16, 2007, when a powerful bomb went off outside the Green (U.S. Safe Zone) Zone and Liberty's Raven 23 Blackwater security team was dispatched to block a traffic circle to enable another team transporting diplomats to get to safety.

As what appears to be civilian traffic mostly either slowed or turned back, a white Kia driving on the wrong side of the road approached the roadblock where Blackwater Team Raven 23 was securing the circle.

Liberty and three others charged in the attack then say what appeared to be Iraqi police began firing at Raven 23, initiating a furious exchange that federal prosecutors later said left at least 14 Iraqi civilians dead and many more wounded.

Prosecutors, meanwhile, claimed Raven 23 shot at civilians with no provocation.

Liberty, Paul Alvin Slough, of Keller, Texas; and Dustin Laurent Heard, of Maryville, Tenn. - were sentenced to 30-year mandatory sentences, while a fourth, Nicholas Abram Slatten, of Sparta, Tenn., was sentenced to life in prison for murder after two manslaughter trials failed to convict him.

Those verdicts came down in 2014. Since then Slatten's conviction was tossed, a second trial ended in a hung jury and a third trial convicted him to life again.

Meanwhile, the 30-year sentences of Liberty, Slough and Heard were tossed in 2017, but in September they were resentenced by the same federal judge in the original trial, Royce C. Lamberth, to anywhere from 12-14 years.

Debra Liberty and her husband, Brian, were devastated, hoping that the sentences would be minimal or that maybe their son would even be released.

Now the online petition has kindled new hope for the families of the four Raven 23 members who languish in prison for a crime they didn't commit amid a warzone fraught with danger.

The online petition is titled "The Biden Four" because it was then Vice President Joe Biden who visited Iraq in 2010 and guaranteed the Iraqi government the four men would receive justice in the United States, even after the case against them had been dismissed.

A new ongoing and multipart podcast that began a few months ago also reveals the vindictive and wrongful, often malfeasant prosecution of Raven 23. It can be viewed at https://podcasts.apple.com/us/podcast/raven-23-presumption-of-guilt/id1468783839

To view Debra Liberty's YouTube video asking for your help go to https://www.youtube.com/watch?v=r_c9yAt-_D4&feature=youtu.be&fbclid=IwAR32uBawUsLfCXzTPjUz-jXn5MSac9aKW8coBjlwD8xaxrWz-_gNCq829nM

Below are links to several of the stories produced by The Rochester Voice.