Organizers pledge 'Rise up Rochester' will be shooting for the stars 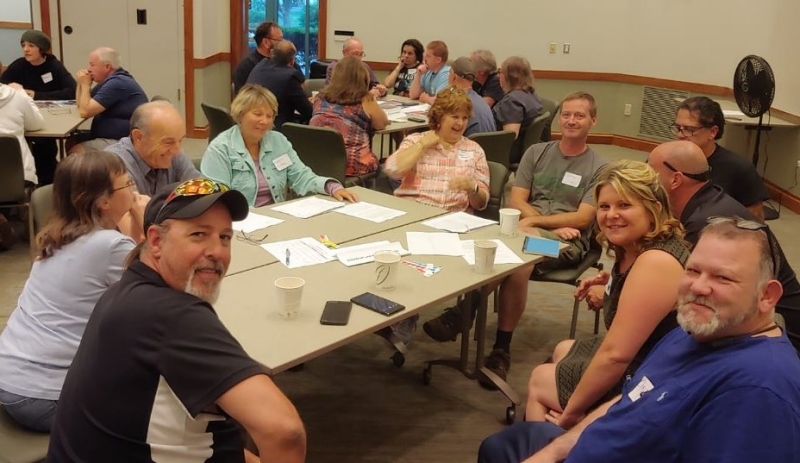 Many of the 45 attendees at a 'Rise Up Rochester' meeting Monday at the Frisbie Memorial Hospital Conference Center. (Courtesy photo)

ROCHESTER - Todd Radict of Skele-Tone Records and Jenni Olson of Freedom Beauty Salon said they believe downtown Rochester is about to turn the corner, thanks in part to a grass-roots group called "Rise Up Rochester" that wants to re-energize the city's inner core to make it family friendly and commercially thriving.

"Everybody is on board, every minute more are joining 'Rise up Rochester' and I see nothing but positiveness for the first time in years," Radict said today. "It's sort of becoming a family now."

"There are a ton of people that want this to happen," Olson said today. "It's good for the city."

During a Monday meeting of about 45 business owners, community and government leaders and interested residents four objectives were singled out that are considered key to sparking a downtown renaissance.

According to group member and Rochester Economic Development Specialist Jenn Marsh, they include:

Some of the things volunteers could work toward in the short term would include painting a portion of the curb and fire hydrants to make them "pop," Olson suggested.

Radict said it's important to draw more boutiques and shops to the downtown to complement its many fine restaurants and bars.

"I know I get customers from Revolution Taproom and Grill," Radict said. "And we need more of those."

Radict believes the text alert and citizen patrols will get the community involved, "And once the community gets involved it's going to cut down on a lot of the graffiti and thefts we see around here."

Both Radict and Olson know that drug use and homelessness are part of the problem that plagues the downtown, but that compassion has to be part of the equation that forms the backdrop of how successful "Rise up Rochester" can be.

"They're not zombies," Radict said. "They're people who need help."

Said Olson, "The best way of keeping crime on the back burner is being there, and if you see someone who looks like they're having issues, ask them if they need help."