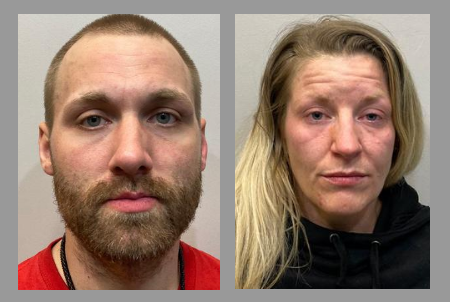 ROCHESTER - A Rochester man and Berwick, Maine, woman were arrested Sunday on active warrants from a downtown April arrest in connection with drug possession and trafficking charges.

The arrests occurred on April 13 a little after 9 p.m. as an officer was conducting an extra patrol near the Spare Box storage facility on South Main Street behind Walgreen's, according to Rochester Police Capt. Todd Pinkham.

"Over the past few months we have taken many calls for thefts and drug activity at various storage facilities, which was the reason for the extra patrol that night," Pinkham said today.

During the extra patrol the officer noticed a minivan parked in the back, and it did not appear as if anyone was around it and there were no open storage units, Pinkham said.

"The officer checked on the vehicle and located two people inside, Kirstyn and Donald Helton," he added. "While speaking with the pair the officer noticed some drug paraphernalia and a small baggie that contained a powder similar to heroin/fentanyl."

Subsequently, the officer later located more drug evidence in the vehicle, leading to the issuance of two arrest warrants.