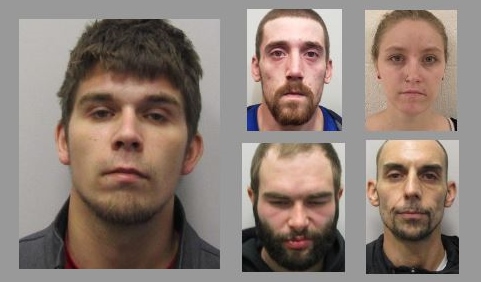 ROCHESTER - A quick nighttime check at a city park and ride that has proved a trouble spot in the past yielded five arrests early Thursday morning.

It all began a little after 2 a.m. as Rochester Police Sgt. Thomas Powers stopped to take a peek at the Fillmore Boulevard Park & Ride.

When Powers arrived he found two cars parked side by side with five people inside the two vehicles. One of them was James Roxallen Hartford, on whom Powers had recently obtained an arrest warrant in a felon in possession of a deadly weapon complaint, Rochester Police Capt. Jason Thomas said today.

When a backup unit arrived a few minutes later, police interviewed all the other individuals, ran their names and found that the other four also had warrants.

"That was very unusual to find they all had warrants," Thomas said today.

Hartford's charge was as a result of police finding a firearm that was allegedly in his control while they were investigating the case of a male transient charged with stealing a car from Auto Images in September. When the suspect in the theft case was taken into custody Hartford was a passenger in the car, Thomas said.

Hartford was also arrested on a drug possession charge.

The other four taken into custody and their charges include:

Thomas said the park and ride became a frequent source of complaints during the summer, mostly for drug activity and people sleeping in their vehicles.