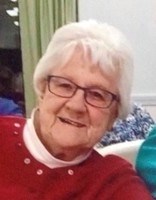 TOWNSHEND, Vt. - Pauline Johnson, 81, of Rochester, N.H., died peacefully on June 8, 2021 at Grace Cottage Hospital in Townshend.
Born in Montreal, Canada on July 22, 1939, she was the daughter of Paul and Antoinette Allard of Milton, N.H. Pauline was first the wife of Henry Eaton, who died in November of 1967. She then married Roland Johnson, who predeceased her in November of 2004. Pauline grew up in Milton, and later resided in Rochester, and then Groveton, N.H.

She worked for many years at Off-Price Outlet in Rochester. She was a devoted wife and mother, enjoyed socializing with her many dear friends, and was often the life of the party. Pauline touched the lives of many as a babysitter, friend, and confidant, many seeing her as a maternal role model. She made countless baby sweaters, mittens, blankets, and kitchen towels for all who could use them. Her pies and desserts were often fought over at family gatherings. Her smile, kindness, and sense of humor will be missed by all who knew her.
She is survived by her four daughters Priscilla (Gregory) Gumina of Penfield, N.Y., Holly (Luc) Tanguay of Berwick, Maine, Diane (Kevin) Gregoire of San Antonio, Texas, and Lisa (Laura Judge) Eaton of Walpole, N.H., brother Paul Allard of Milton, sister Lily Pennell of Holyoke, Mass., five grandchildren, and three great-grandchildren.