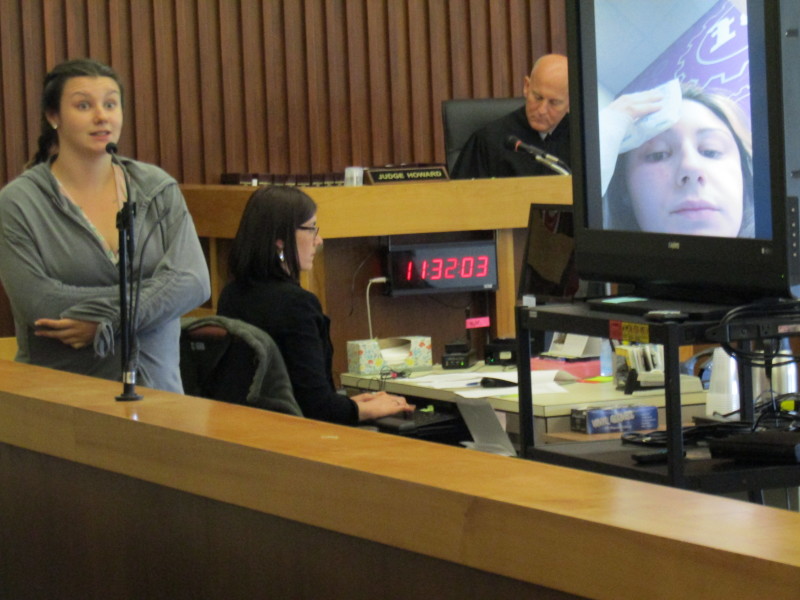 Erin McCarthy describes a picture she posted on Facebook that shows injuries she sustained in the June 12, 2017, beating in the Planet Fitness parking lot. (Rochester Voice photos)

DOVER - The Planet Fitness beating case that riveted the Northern Seacoast and was reported on nationwide went to trial on Wednesday with the victim taking the stand first to describe the vicious unprovoked attack by a Portsmouth man she didn't even know.

Jordan Lamonde, 23, of 900 Woodbury Ave., Portsmouth, faces up to 10 years in prison if convicted of second degree assault and three simple assaults.

In a couple of unusual moves by the defense on Tuesday, attorney John Durkin and his client agreed to stipulate that the man seen in surveillance video beating the victim is Lamonde. Later during opening arguments Durkin urged the jury to come back with a single simple assault guilty verdict, prompting Strafford County Superior Court Judge Mark S. Howard to pointedly question Durkin as to whether his client had agreed to this strategy, to urge the jury to deliver a guilty verdict on a criminal charge.

Durkin and Lamonde agreed they had decided together to employ such a strategy, and with that said, the first witness was called, the victim in the case, Erin McCarthy.

McCarthy, who had been very open with the media in the weeks after Lamonde's arrest, described in detail the beating she took from Lamonde, even describing pictures she'd taken of herself and posted on Facebook just days after the attack.

Under questioning from Deputy County Attorney Tim Sullivan, McCarthy, who worked at Planet Fitness, described how she left the gym around 10 p.m. on June 12 while carrying her gym bag, purse and watching a Facebook video on her phone as she approached her car.

"The next think I remember I was getting punched in the back of my head," she testified.

McCarthy, who testified she had never met her assailant, said she had vaguely seen a figure walking past her, but thought he was headed in for a workout at the gym.

Surveillance video, however, showed Lamonde pivoting after he passed her, then loading up with a right punch and delivering a haymaker to the right side of her head.

McCarthy said after the 30-second attack was over and 46 punches had been thrown, she "hurt all over" with a black eye, bruised arms and ribs.

She told Sullivan that after Lamonde ended his attack and got in his Ford Fusion to leave, she scrambled to her feet and ran back into Planet Fitness to get help and call police leaving her purse and gym back on the parking lot pavement.

"I was afraid he was going to run me over," she said.

McCarthy was treated and released from Frisbie Memorial Hospital that night, but said she was sore for weeks.

During cross-examination Durkin asked her if, indeed, Lamonde had tried to run her over that night.

In opening arguments Durkin sought to distance his client from the second degree assault charge, which requires a reckless indifference to human life to be present in the defendant's mind.

Durkin argued that Lamonde may have committed simple assault, but that he never intended to or thought the attack would kill his victim.

He also noted that his client had brought no gun, no knife and no blunt instrument that night with which to hit the victim.

"And he left, not because of a Good Samaritan or a police siren," Durkin said. "He left on his own."

Meanwhile, Sullivan portrayed the attack as "vicious" in his opening statement, telling jurors the victim had been punched 46 times, kneed in the face and head and "tossed around like a rag doll."

He also told jurors the likely motive for the attack, however implausible or unbelievable it might seem: that it was payback for the alleged theft of $30,000 from a safe at Lamonde's residence that he suspected had been pilfered by McCarthy's current boyfriend, who had previously known Lamonde.

"He punched her 46 times and kneed her in the face twice to send a message to her boyfriend," Sullivan quipped.

The jury trial continues Thursday with more prosecution witnesses including the paramedic who treated the victim the night of the beating.