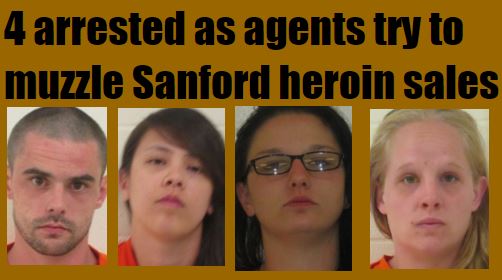 SANFORD - One Sanford woman was arrested today and another three Sanford residents were charged earlier this month as MDEA agents and Sanford Police look to clamp down on heroin trafficking in the city.

Ashlyn Smith, 26, was arrested today, while Ian Blow, 25, Samantha Barnett, 25, and Stephanie Meunier, 26, were arrested earlier in the month.

Smith was charged with two counts of felony aggravated trafficking in heroin.

Blow was charged with felony aggravated trafficking in heroin and/or fentanyl.

Barnett was charged with felony aggravated trafficking in heroin and/or fentanyl.

Meunier was charged with felony aggravated trafficking in heroin and/or fentanyl.

Agents assigned to MDEA's York District Task Force have been investigating the sale of heroin in Sanford for some time, and agents are seeking to find out if any of the suspects are connected to six overdoses in a 24-hour period in Sanford last week.

On June 2 agents with the assistance from State Police stopped a car in Lebanon occupied by Blow, Barnett and Meunier. Agents intercepted the trio as they were returning from Lawrence, Mass., with heroin allegedly to be sold in greater Sanford.

Seized were 25 grams of a heroin/fentanyl mix. The three were arrested and remain in the York County Jail where bail has been set at $25,000 cash each. Drug agents also conducted undercover purchases of heroin from Smith.

Agents obtained arrest warrants for Smith charging her with the undercover purchases. She was arrested today at her Sanford residence by agents and Sanford Police. Smith was transported to the York County Jail. Bail was set on the warrants at $50,000 cash on each count.

Additional arrests are anticipated by MDEA and Sanford Police as the investigation continues.