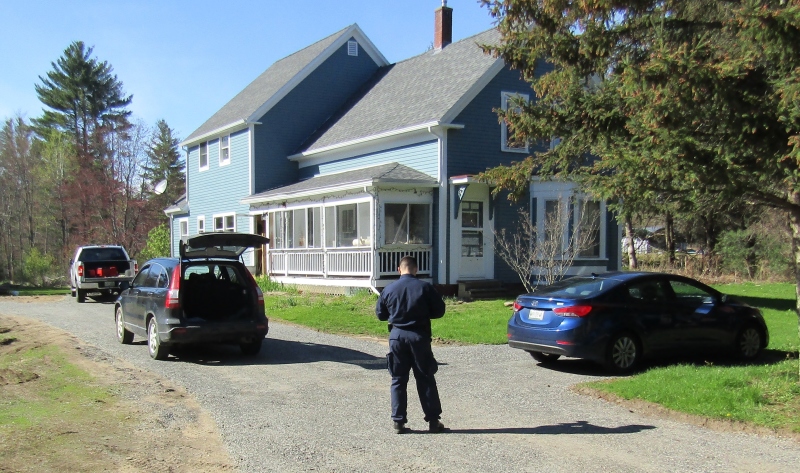 The house at 37 Bigelow Road, the scene of the murder-suicide. (Rochester Voice photos)

LEBANON, Maine - Police say the bodies of a man and woman were found inside a South Lebanon home this morning.

The victims in the shooting at 37 Bigelow Road have been identified as Allison Parker, 30, and Thomas Doyon, 27. The couple had recently broken off a three-year relationship. Police believe Doyon shot Parker then turned the gun on himself.

Parker had come to the home with a girlfriend, and her parents were also in the home when they heard gunshots from an upstairs bedroom.

The three fled the house and called State Police.

Troopers, assisted by the State Police tactical team, responded to the house and about 3:45 p.m. members of the team entered the house and found the two bodies.

Autopsies will take place Sunday at the State Medical Examiners Office in Augusta. Parker was the mother of a 7-year-old daughter, but Doyon was not the father.

A couple who live across the street said Parker had moved out but had returned today with her cousin to retrieve some of her belongings.

Mark and Shelley Stevens said they learned of the shooting by way of a cellphone video taken by an unnamed person who had run from the house as tensions escalated and recorded the incident. The couple said they heard four shots in rapid succession from the video.

The couple was told to evacuate their home around 10:30 a.m. and weren't allowed to return till after 4 p.m.

Police arrived on scene around 9:45 a.m. and the crime scene was taken over early on by the Dept. of Safety's Major Crimes Unit. Investigators were still on scene collecting evidence late this afternoon and are expected to stay on scene overnight.

Prior to SWAT teams leaving, police could be seen in camouflage clothing in full tactical gear, with faces painted in camo as well.

A Major Crimes unit truck and evidence truck were also on scene along with Lebanon Fire and Rescue personnel.