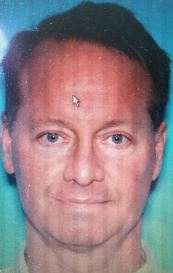 COPYRIGHT2017© WEST LEBANON - A Maine State Police sergeant said on Sunday that safety officials continue to actively pursue the suspect in a brutal domestic violence assault last month knowing that the probe has morphed into a missing persons case as well.

Dale Godfrey, 52, of 167 Sam Wentworth Road in West Lebanon, was last seen on April 26 around 4 a.m. after police say he apparently got into a confrontation with his wife and violently assaulted her.

After the alleged attack, he fled the scene, according to police. His truck was found a couple of miles away about 15-20 yards down a driveway near where a house is being built across the street from Poplar Hill Road where T.M. Wentworth and Champion streets meet in West Lebanon.

State troopers have noted that the interior of Godfrey's truck was covered in a large amount of blood and that Godfrey was known to carry box cutters in the truck.

When tracking dogs failed to keep his scent more than a short distance, it was theorized by police that he may have been picked up by someone or that he may be in a body of water like Milton Three Ponds or the Salmon Falls River downstream.

State Police Sgt. Jonathan Shapiro, a supervisor at the Troop A barracks in Alfred that patrols Lebanon, said police will begin a new focus on the case this week, though he was tight-lipped on what that focus would be.

"I can't say what we will do next, but we have something planned for this week," he said.

Shapiro would not comment on whether the new focus might be for cadaver dogs to scour Depot Pond and downstream, something that police had mulled as a possible option.

"All I can say is it's an active probe," Shapiro said. "We're investigating a criminal act, but we're also concerned for his safety.

State Trooper Kyle Wells said a week ago that none of Godfrey's family or acquaintances had heard from him, that he made no transactions on any bank accounts and that his phone was turned off. Godfrey's checkbook was found in a stream near where his pickup was found.

Shapiro said he was aware that some people had sought to organize a search party to scour the woods near the scene, the lake and downstream, but that this was not the time to do that.

"We're doing this in a way that is appropriate for the time lapse and due to the offense," he said. "Private citizens helping now is not helpful. If that changes, we will let them know."

Portions of the Salmon Falls River below the Milton dams can be quite treacherous, especially with the spring runoff and recent rains, which may be another factor why any searches by the public are currently frowned upon.

Godfrey's wife was treated and released with what were described as minor injuries, police have said. She is now at a safe area location with the couple's two young children, according to Wells.