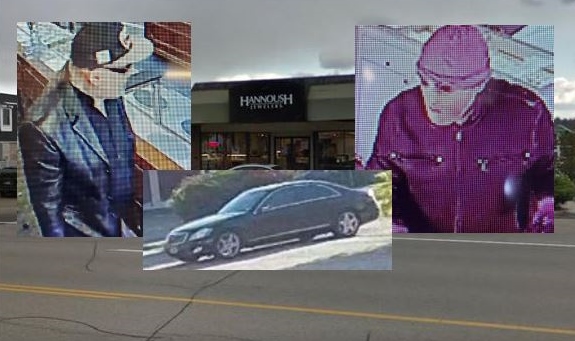 Surveillance images of the two suspects who entered the store and the getaway car.

DOVER - An undisclosed amount of jewelry was stolen from a Dover jewelry store during an armed heist earlier today.

Police say two men walked into the Hannoush Jewelers at 863 Central Ave. around 10 a.m. with one of the pair displaying a handgun.

The men then ransacked several jewelry cases before fleeing in what police thinks was a dark blue or black S Class Mercedes with possible New York license plates driven by a third suspect.

Both men who entered the store were wearing masks. Luckily, there were no customers in the store at the time of the robbery.

The other suspect is described as a white male wearing a mask, skull cap, and a brown leather jacket. He is described as being about 5'8" tall with a medium to stocky build.

The getaway car was driven by a third individual, also described as being black.