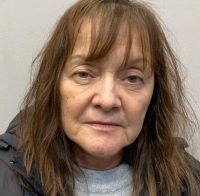 ROCHESTER - Wednesday's icy conditions accounted for almost 30 accidents, according to Rochester Police, including one after dark that resulted in felony charges against a Somersworth woman for allegedly falsifying physical evidence in her DWI arrest.

Police say the two-vehicle crash occurred around 6:15 p.m. at the intersection of Old Dover and Tebbetts roads.

Driving the Buick was Micheline Anne Quirion, 62, who had removed alcohol from her vehicle and hid it in a nearby ditch, a witness told police, Rochester Police Capt. Todd Pinkham said today.

"During the course of the investigation Officers determined Quirion was under the influence," said Pinkham, who added the officers located unopened cans of alcohol in the ditch.

Pinkham said police believe the pickup was traveling east on Old Dover Road, and the Buick was turning off Tebbetts onto Old Dover Road when the collision occurred.

Quirion was issued a summons for failure to yield right of way and arrested for DUI and falsifying physical evidence, a Class B felony punishable by up to seven years in state prison.

In all Rochester Police responded to 29 accidents on Wednesday.