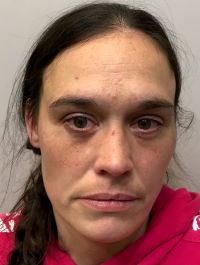 ROCHESTER - A Rochester transient with four bench warrants for drug possession and assault on law enforcement was arrested on shoplifting charges Sunday at Walmart.

The arrest at Walmart unfolded around 9:25 p.m. when loss prevention personnel noticed a female later identified as 35-year-old Chantell Marie Tibbetts apparently shoplifting in the store.

After she exited the store without paying, she was approached by loss prevention and brought back inside.

When Rochester Police arrived, the female gave the officer a name they determined was false. Once her name was confirmed, it was learned she had active warrants out of Strafford County and Rockingham County for her arrest: three for drug possession and one for simple assault on an officer.

Upon her arrest she was found to be in possession of heroin/fentanyl.