Police try in vain to stop wrong-way driver on I-93, Rt. 101 before fatal crash 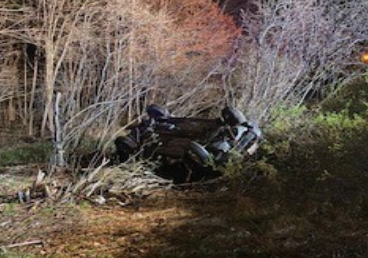 Scene of a crash early today in Candia. (NYHSP photo)

CANDIA - State Police say a Massachusetts man found driving the wrong way on Interstate-93 and then on Route 101 died when he abruptly left the roadway in Candia and crashed into woods.

The incident unfolded around 1:45 a.m. when Trooper R. Bifsha of Troop B barracks, was on patrol in Salem on I-93 when he observed an SUV coming at him, head on, traveling north in the southbound travel lanes.

Attempts to deflate the vehicle's tires with spike strips were made several times but were not successful.

At the Route 101 split in Manchester, the car took the ramp to Route 101West to head eastbound.

Troopers continued to shadow the car on the eastbound side of the highway as it continued in the wrong direction on the westbound side of Route 101. Troopers conducted rolling roadblocks where possible and signaled motorists to stop all along the way.

In the area of mile marker 105.6 in Candia, troopers observed the car, a 2003 Ford Escape, suddenly veer off the roadway and into the woods.

A short time later troopers located the vehicle and the driver, identified as 39-year-old David Hartenstein of Fitchburg, who was pronounced dead at the scene.

Anyone with information pertaining to this incident is encouraged to contact Tr. P. Sankowich at the New Hampshire State Police - Troop A Barracks at 603-583-3795.