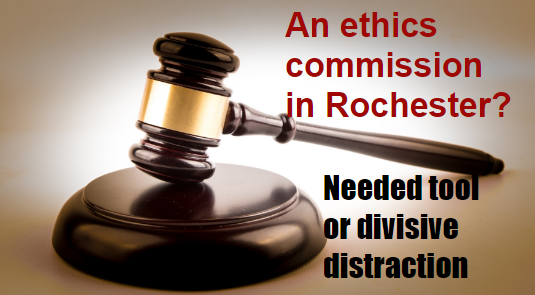 SECTION 70 ROCHESTER CITY CHARTER By an affirmative roll-call vote of at least nine City Councilors, the City Council may remove any elected City official from office for prolonged absence, inattention to duty, mental or physical incapacity, incompetence, willful violations of state statutes, this Charter, or City ordinances, or misconduct in office. Such vote shall be on specific written charges approved by a majority of the City Council, and after due notice and hearing called upon the majority vote of the Council. A vacancy occasioned by removal under this section shall be filled in the manner provided in the Charter.

Anybody reading the above would probably think that if a Rochester elected or appointed official had their hand in the cookie jar or was simply unable or unwilling to do their job they would be subject to removal.

And they'd be right.

But next Thursday the codes and ordinance committee will begin the daunting task of writing an ethics commission ordinance that may well take as much time as deciding this year's budget.

The committee will likely begin by parsing ethics commission language from Somersworth, Dover and also Portsmouth, which is the only area city that has actually used the commission in the potential removal of an elected official.

If you read The Rochester Voice article of March 24 you can see that that ethics inquiry by that ethics board led to a decisive vote by the Portsmouth City Council to reject the ethics board's unanimous vote to remove Councilor Esther Kennedy.

Immediately following the council's decision former City Councilor Nancy Pearson - who single handedly initiated the complaint - said the accused may have been found innocent by the City Council but would be forever remembered as being found guilty by the "impartial" ethics board.

"Luckily, the swift, unambiguous, and unanimous decision of the independent Ethics Board still stands. Esther Kennedy is guilty of committing an ethics violation and that will always remain true in Portsmouth," she told the Portsmouth Herald.

Interestingly, it should be noted that when President Clinton on Feb. 12, 1999, was found not guilty by the Senate after his impeachment trial the Portsmouth Herald ran a 100-point headline over a picture of the former president that read (all caps), "VINDICATED". Hmmm!

So to say that any ethics board inquiry can get political in a heartbeat is an understatement. Right?

Rochester City Councilor David Walker, who has been serving since 1995, said the potential for partisanship and politically motivated "witch hunts" worry him the most when it comes to establishing such a commission.

Portsmouth's ethics commission language states that after a complaint is sent to the City Attorney they get together with the mayor and decide if it warrants an investigation, kind of like a probable cause hearing or an indictment.

As an aside, one local respected attorney once told me, "You can indict a ham sandwich."

Under Portsmouth's ordinance if either the mayor or city attorney finds credibility with the complaint it moves on to the Ethics Board for a full investigation, so a single vote at that juncture can launch a full-scale probe.

Walker told The Rochester Voice that during his tenure there has never been an attempt by City Council to remove an elected official, although he said at one time there were some distinct rumblings about doing just that.

But it never came of fruition.

The push for an ethics board in Rochester comes from City Councilor Jeremy Hutchinson, who said during his proposal earlier this month that he wanted past offenses and also the dubious "not promoting the integrity of government" to be among the mix of predicates for such an investigation.

Merriam Webster says the definition of ethics is "a set of moral principles, a set of moral values, the principals of conduct governing an individual or group."

High minded, altruistic, laudable endeavors, but not the first adjectives that come to mind when it comes to politics.

So how do you keep politics out of the fray?